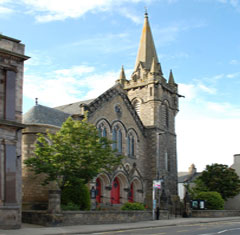 A man convicted of conning people into purchasing holiday homes at a Moray caravan park that were not his to sell is being accused of defrauding an English publican just months after being sentenced at Elgin Sheriff Court.

Neale Rothera admitted selling caravans to unsuspecting members of the public while employed at the Silver Sands holiday park near Lossiemouth.

He was spared jail when he appeared for sentence in 2012 when it was reported he had paid back part of the £53,000 he had fraudulently obtained from selling seven people caravans that were not his to sell.

His activities first came to light in 2009 when it emerged that several caravans on the site had multiple owners. At that time Rothera was employed by Green Parcs Ltd on the Moray site – Green Parcs later went into administration with debts of over £14million – the caravan park was eventually taken over by Lifestyle Living Group and is now operated by Richard Wight Estates.

Now a Leicestershire based pub owner and property developer is accusing Rothera of cheating him out of £45,000 over the sale of a pub in December, 2012.

Alex Firth says he was not aware of Rothera’s conviction earlier that year at Elgin Sheriff Court when he agreed to sell him the Apple Tree Inn at Quorn in Leicestershire. “Rothera gave me a down payment but, from the second the next payment was due, everything fell apart,” Mr Firth told the Press and Journal.

He added: “It has been a living nightmare – he’s left me penniless. It baffles me that someone who ripped off so many people could be spared jail and be free to target other unsuspecting victims.”

Mr Firth said that he subsequently researched Rothera online and was horrified to then discover the Silver Sands scandal. He has taken court action to reclaim some of the £45,000 he says he is owed, but while a court did rule in his favour in February he does not believe he will see a penny of his money again.