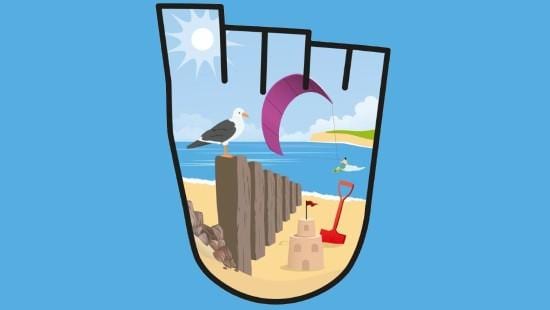 KINLOSS PRIMARY PUPIL Sam Robbins will see a badge design he created being awarded over the next year as part a campaign to encourage children to walk to school.

Sam’s design was one of 11 that was selected from 100,000 entries by pupils throughout the country as part of the WOW – the year-round walk to school challenge from Living Streets.

WOW sees pupils who walk to school at least once a week rewarded with collectable badges for each month of the school year. More than half a million copies of Sam’s winning design will be created, using recycled yoghurt pots, to be collected by pupils all over the UK.

Thanks to her winning design Sam has won an exclusive WOW goody bag – and Kinloss Primary School will receive free WOW resources for the 2016/17 academic year to allow them to continue taking part and encouraging pupils to walk to school.

Chris Thompson from Living Streets said: “This year we had more than 1000 finalists from over 340 schools.

“We received some fantastic drawings ranging from local landmarks to hidden treasures and neighbourhood heroes. Every entry reflected the creativity and passion shown by the children for their local area.

“It was difficult to choose just 11 winners as the standard was extremely high, so Sam should be very proud. We look forward to having Kinloss Primary school take part in WOW next year – we’re sure it will continue to make a huge difference to their pupils’ health and happiness.”

Sam chose nearby Findhorn beach on a summer’s day as the inspiration for his design, saying that he had “drawn the beach because it has lots of wildlife”.

Moray MSP Richard Lochhead said: “This is a fantastic winning design that captures the colours and beauty of the Moray coast.

“It’s great that a pupil at Kinloss Primary, a school that do so much to promote healthy, active travel, has won this prestigious Walk to School design competition.”

Walking to school is an easy and free way for children to get active and stay healthy – teachers have confirmed that pupils who walk to school are more alert, ready to learn and achieve better grades than those who are driven.

Kinloss Primary have one of the highest rates of active travel to school in Scotland and regularly record more than three quarters of pupils walking, scooting or cycling to their school.