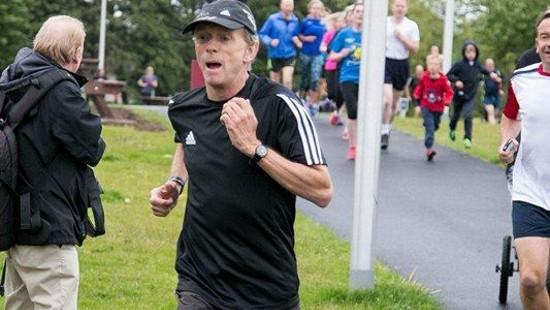 THE GROWING POPULARITY of the weekly parkrun in Elgin was underlined on Saturday when an international athlete of note lined up at Cooper Park.

South African marathon and ultra-marathon runner Bruce Fordyce joined his wife at the start of the parkrun – a distance away from the 61-year-old’s career highs.

Bruce was a winner of the London to Brighton marathon three times in a row – and such was his dominance of his home-based comrades marathon, he won the event eight times in a row between 1981 and 1988 – winning a ninth and final time in 1990.

Born in Hong Kong, Bruce moved to South Africa at 13 – and went on to enjoy a sparkling athletic career that also included his holding the world record over 50miles (achieved in the London to Brighton run in 1983) – which still stands – and a world record over 100km.

These days he can be found on parkrun events around the world – Elgin being just the latest, a great honour for Moray from a man whose legendary reputation around the world prompted him to be described in the United States as “Bill Rodgers, Michael Jordan and Tiger Woods combined in South Africa”.

“That American characterisation made my day,” Bruce said in a 2013 interview, adding: “I only wish I had the financial success of those fellows – others will have to figure out who I am.

“All I can tell you is I’m a proud South African – and I love sports, especially running.”

While the days of competitive racing are over for Bruce, his love of running remains strong: “I now run for fun, aiming to break nine hours each year at Comrades and 5:30 at Two Oceans, our other famous South African ultra, a 56-km race from the Atlantic Ocean side of Cape Town to the Indian Ocean on the other side.

“I run four or five marathons a year and a lot of shorter distance runs, all for health and fun.”

Watching the race on Saturday was the man who relieved Bruce of his world 100km record – Lossiemouth’s Donald Ritchie, 70, who grasped the opportunity to meet a fellow legend.

On Saturday Bruce finished in a respectable 60th position in the parkrun, finishing the course in 23:55, almost seven minutes behind race winner Paul Rogan (Forres Harriers) in 17:06.

All are welcome to take part in the weekly parkrun setting out at Cooper Park at 9.30am each Saturday morning. Taking part is free of charge but those taking part are asked to register – you only ever have to do so once.