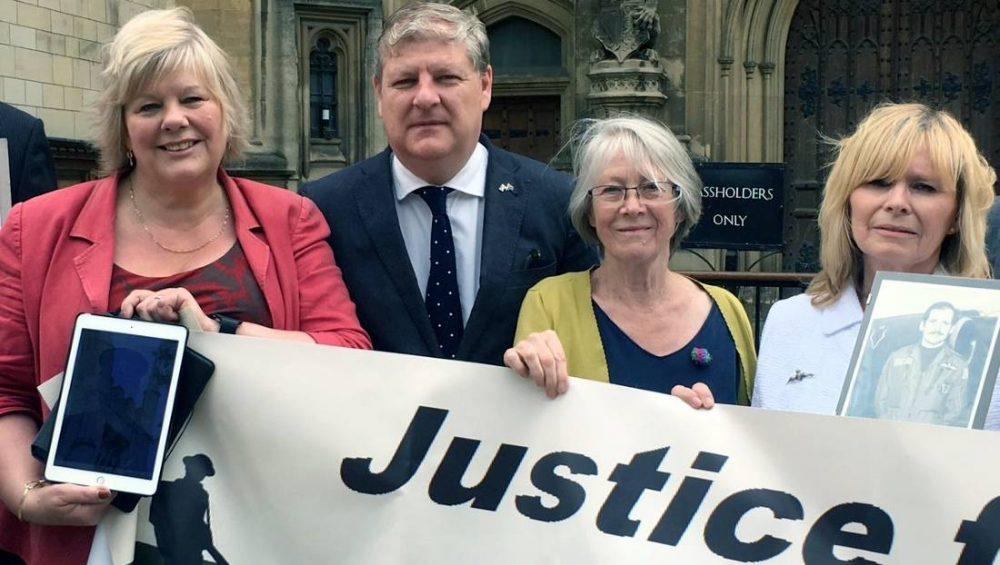 MORAY WOMEN HAVE joined war widows in a national protest this week at Westminster, demanding that David Cameron takes action over their being stripped of their pensions.

Maureen Jarvis led a group of women who met with local MP Angus Robertson as they carried their protest to the Prime Minister’s doorstep.

Their long running campaign relates to a change in legislation that meant war widows whose partners died between 1973 and 2005, but we remarried before April 2015, would no longer qualify to receive a war widows pension.

Mrs Jarvis was married to RAF navigator Alan Campbell, who died when the RAF Lossiemouth based aircraft he was flying in crashed off the Scottish west coast in 1990. She subsequently remarried in 2014 – and as a result of the legislation lost her war widows pension from the Ministry of Defence.

A bizarre quirk of the legislation is that should Mrs Jarvis divorce her Moray Council education officer husband and then remarry him, she would once again qualify for the pension.

After meeting with Angus Robertson in London this week, Mrs Jarvis described the situation as an “injustice” to all the war widows in a similar predicament and who are demanding that the Prime Minister takes action to change the “grossly unfair” legislation.

She said: “It is not about the money – we are the only group of war widows that do not get their husband’s pensions for life. It is the injustice of it all – my husband would be disgusted.”

Angus Robertson has urged the MoD to revise their rules, saying that the denial of widows receiving the pension that was rightfully theirs was “patently ridiculous”.

He said: “I was pleased to join Maureen Jarvis, Judith Sutherland and Angie MacKenzie at their protest today to demand justice and call on the UK government to reinstate the war widows’ pension to those who have been denied it.

“Our armed forces make huge sacrifices to protect our country and the UK government has a duty to uphold the Armed Forces Covenant and take care of our service personnel and their loved ones.

“It is especially incumbent upon the UK government to support the loved ones of service personnel who have died while serving. It is completely unacceptable that the UK government continues to unfairly deny hundreds of war widows a pension that is rightfully theirs simply because they have remarried. No one should have to choose between economic security and finding love again after the tragic death of their partner.

“These are widows whose husbands paid for their military service with their lives and the state should recognise that sacrifice. I will continue to do everything I can to make sure the UK government changes this deeply unjust policy.”

Campaign group Innocent Victims United agreed, with their spokesman Kenny Donaldson saying that through their actions “the Government demeaned the human life that was lost for this country”.

A video depicting the plight of the war widows can be found online.