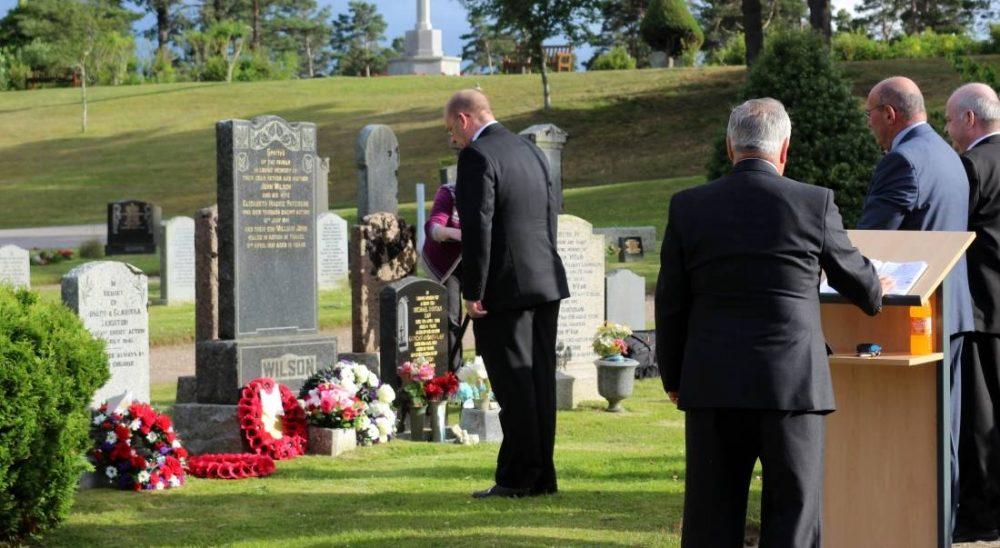 LOSSIEMOUTH HAS PAID a touching tribute to the only WWII bombing victims in a Moray town 75 years after a solo JU88 attacked their community.

Dozens turned out on a sunny evening at the graveside of John and Elizabeth Wilson and the couple who were lodging with them on the night a bomb destroyed their Dunbar Street home, Joseph and Clarissa Leighton.

Wreaths were laid on behalf of the town’s Community Council and Community Development Trust as well as local ex-servicemen, who raised their standards in tribute.

Lone piper Andrew Stone played a lament before Lossiemouth historian Donnie Stewart told the story of the night his town was visited by the German bomber, reading a detailed account from one of the survivors.

Chairman of the Lossiemouth Community Council, Mike Mulholland, said: “It was a touching and very fitting tribute to those who tragically lost their lives that night.

“We were delighted to see representatives from the ex-service clubs, RAF Lossiemouth and Moray Council alongside many members of the public.”

In his tribute Mr Stewart remembered the shock felt in the community – although death was no stranger to Lossiemouth at the time.

He said: “We had seen losses but these were from members of our community who were away fighting with the armed forces – this was very different – this time the war had been brought to Lossie in an ultimately tragic fashion.”