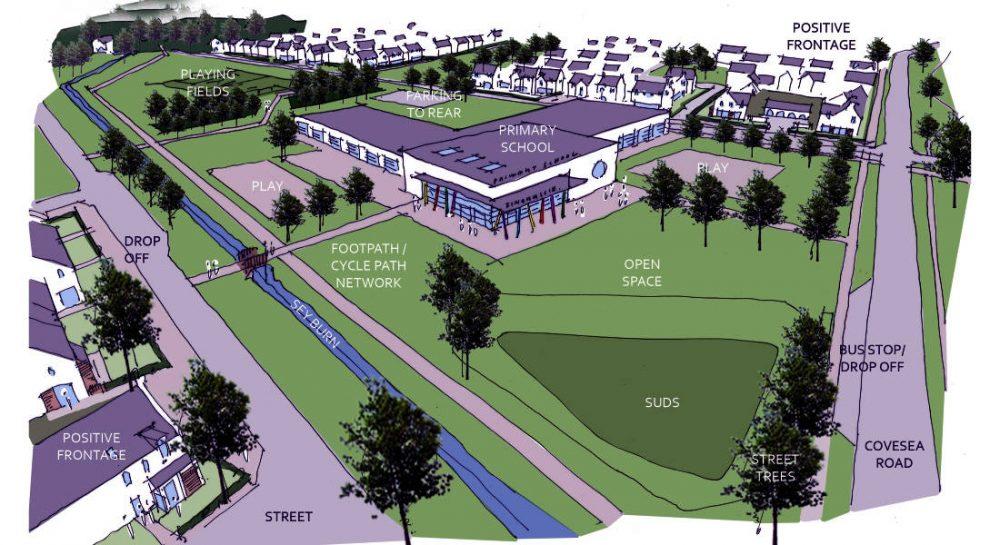 AMBITIOUS PLANS FOR the expansion of Elgin to the north has seen Moray Council and developers Pitgaveny being shortlisted for a national award.

Plans for the new 1500-home neighbourhood at Findrassie have caught the attention of the government’s Scottish Awards for Quality in Planning – annual awards that promote innovative approaches to planning of new developments in Scotland.

The annual award is hotly contested by planning authorities and consultants throughout the country – now the team behind the Findrassie plan, the owners of the land at Pitgaveny and their design team led by Debbie Mackay of Savills in partnership with Moray Council, are in line for the award.

“What is different about the approach taken at Findrassie is the way in which the widest possible partnership has been fully embedded in the project from the outset,” Jim Grant, the head of development services at Moray Council said.

He added: “Not only have the Council and Pitgaveny worked incredibly closely on this masterplan but a particular emphasis has been on engaging with younger people in our town, the ones who will most likely live with, or in, the 1500 house neighbourhood being created over the next 20 years at Findrassie.”

Crinan Dunbar, who is joint owner of Pitgaveny, added: “For many years now we have hosted visits from school groups, mainly from Elgin Academy and its primary schools, to observe and learn about our farming and environmental practices here at Pitgaveny.

“In recent years we have included visits and workshop sessions on the creation of a new neighbourhood at Findrassie. These included sessions on how houses and streets could be laid out, what kind of housing best suits the area’s needs, how people should move about, what schools and play parks might look like and what they should contain.

“It has been an enlightening experience for us, and for the Council’s planning officers who worked with us during these visits, to hear the imaginative insights that young people have into what a vibrant neighbourhood should include. They look 20, 30 and 50 years into the future.”

Debbie Mackay, Savills rural planning director, added: “At one of the public exhibitions for the masterplan we invited a group from the Elgin Youth Cafe to talk about creating a new neighbourhood for Elgin.

“As they did so, a graphic illustrator transferred their spoken ideas into a visual representation of the kind of living and working areas they wanted to see for their future, in their town – we used their ideas to inspire the designs.”

Findrassie is also eligible for the “People’s Choice Award” introduced by Scottish Government, with support from the Festival of Architecture, in order to mark the 2016 Year of Innovation, Architecture and Design.

Debbie concluded: “We are very proud of the Findrassie masterplan and are delighted to have been shortlisted.

“We now need to communicate the visionary enthusiasm of Elgin’s young people to the national judges.

“Further, the People’s Choice Award is open to all, and we hope the local residents of Moray might consider visiting the website and placing a vote for Findrassie.”