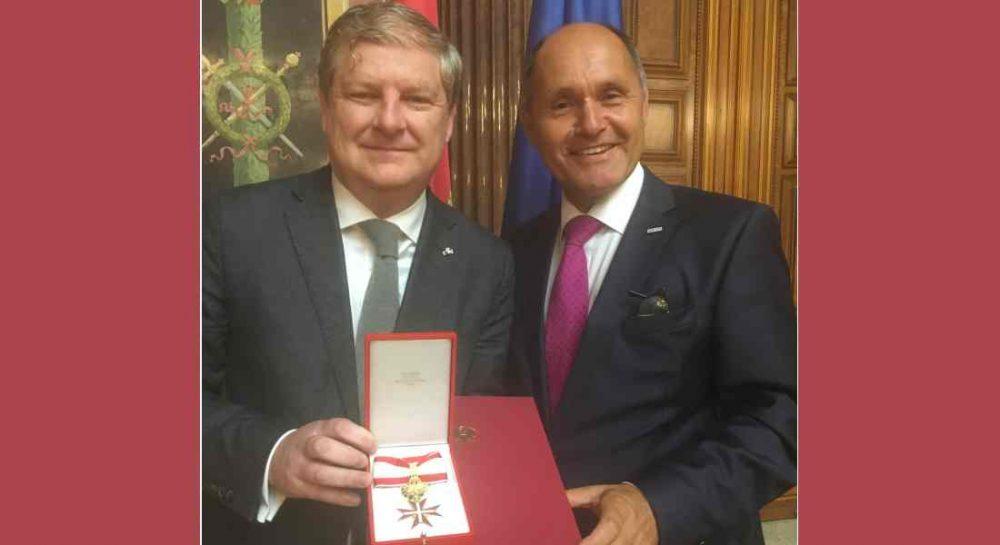 MORAY’S MP HAS been honoured by the Austrian Parliament in Vienna and declared a “good friends of Austria and Europe”.

Angus Robertson received the Grand Decoration of Honour in Gold, an honour ordered by the outgoing Austrian President Heinz Fischer.

Mr Robertson received his honour from the Austrian Parliamentary Leader, Reinhold Lopatka and the Austrian Ambassador to the UK, Martin Eichtinger, in a ceremony that was attended by interior minister Wolfgang Sobotka, senior diplomats and former journalism colleagues from Mr Robertson’s days working in the Austrian media.

Angus Robertson worked as a journalist for the Austrian Broadcasting Corporation and as BBC correspondent in Vienna during the 1990’s – and has served as Chairman and Secretary of the Austrian Parliamentary Group at Westminster since 2001. He is a regular German-language commentator on the Austrian media.

Following the awards ceremony the MP said: “It is a huge honour to be granted this award by the Austrian president and to receive it in the Austrian parliament. I have a huge affection for the Alpine republic and am fortunate to have lived and worked there for a decade.

“Cooperating between European nations is really important to me and I have worked to foster relations between Austria and the UK in the Westminster parliament since 2001. This award is recognition of the value of European cooperation which I will continue to support into the future.”

Martin Eichtinger said of the Moray MP: “Angus Robertson is a good friend of Austria and Europe. We are hugely indebted to him for his efforts to foster relations between Austria and the UK at Westminster since 2001.

“This award is a valued token of our appreciation for his work as Chairman and Secretary of the Austrian Parliamentary Group as well as his promotion of Austria at home and abroad.”