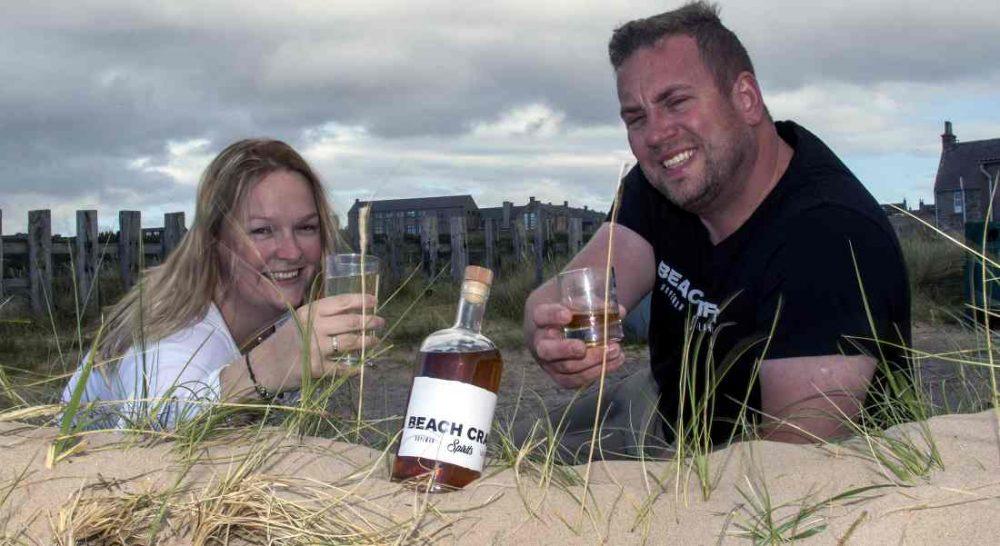 A MORAY COUPLE are set to take on a lifetime ambition by opening their own coastal-based rum distillery – only the second of its kind in the country.

David and Lara Beach are hoping that an online fundraising effort will bring in the £65,000 they need by the end of October to make their dream of owning and operating their own craft distillery become a reality.

‘Beach Craft Spirits’ is named after the couple – but also recognises their passion for the Moray coastline on which they live. The Hopeman couple are crowdfunding to generate the money needed without resorting to bank loans and credit cards – and if successful they hope the distillery will be operational by Spring next year.

Those donating to the venture through crowdfunding can expect a series of exclusive benefits, with investor packages ranging from £50 to £1000. Those donating a minimum of £50 will receive a launch party ticket and a 500ml Bottle of Spiced Rum.

For those willing to put £1000 into the venture there is also a launch party ticket – and the ability to turn distiller for the day and will personally bottle a 700ml of the spiced and intense rums. They will be given a three-year-old aged rum in a specially crafted driftwood presentation box, a T-shirt, samples bottles of new flavours, branded glasses and a hoodie, six rum stones and an exclusive 36- Knots beanie in the Beach Craft colours.

Lara Beach said: “We are so excited about launching the crowdfunding and we hope that people will understand our ethos and want to become part of the Beach Craft Spirits journey.

“It has been so busy the last few months trying to get this up and running. We have sold what we can of our own to get started and we are now ready to move to the next stage.

“We want to people who have a passion for spirits and of course, in particular rum to get involved. The craft gin market exploded onto the scene a couple of years ago and craft rum is going to emulate this success”

Husband David has a degree in brewing and distilling with 16 years’ experience in the drinks industry – latterly working for Diageo, a global leader in spirits.

He said: “There is an abundance of local gin distilleries popping up all over Scotland and the United Kingdom offering people a wide range of choice of gins with exciting flavours. The rum market is completely different and is dominated by the mainstream players.

“We will be proud to become only the second rum distillery in Scotland. Moray is also a fantastic hub for craft produce, it already supports five craft breweries and two craft gin distilleries all within the heart of whisky country.

Such support for new and exciting produce sets Beach Craft Spirits in a prime position for the rum sector in this area.”

Once operational, Beach Craft Spirits intend to launch a trio of rums – a spiced rum, a sloe rum and an intense rum which will be a unique blend of fruit, coffee and liquorice. The company plans to use local suppliers and companies to ensure the best quality of ingredients as well as specially selected cane molasses which will be distilled in purpose-made copper stills.

David added: “This is not a pipe dream or some pie in the sky idea. It has been well thought out and researched. Forecasts show that craft rum sales will explode in the same way as gin has, hence our strapline, ‘It’s a Shore Thing.’

“Our goal is to create a range of drinks that encompass the beach lifestyle. Beach may be our name, but it’s also where we feel most at home. Our spirits are aimed at people who have a similar vision to us, who like to work hard, but play hard too.”

To find out more about Beach Craft Spirits and how you can help establish Moray’s first rum-producing distillery visit: www.beachcraftspirits.co.uk