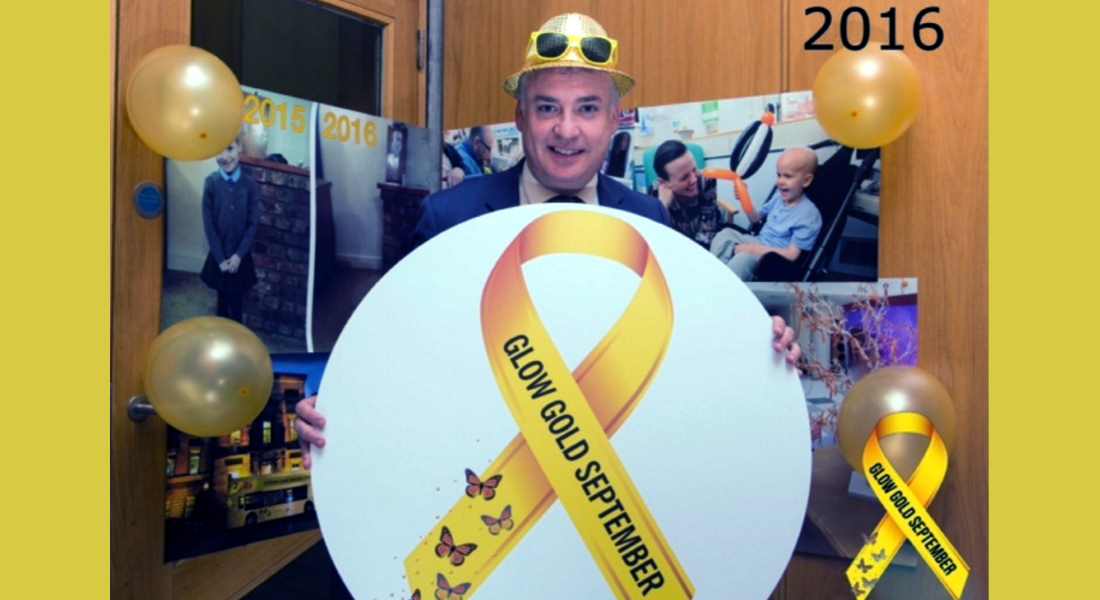 CHANGING THE FACE of childhood cancer is the aim of a campaign that was launched at the Scottish Parliament this week and supported by Moray’s SNP MSP, Richard Lochhead.

The MSP joined the ‘Glow Gold September’ campaign, meeting a group of parents and grandparents to find out how people in Moray can themselves ‘glow gold’ and by doing so raise the profile and awareness of childhood cancer and its warning signs.

Glow Gold September is a grassroots campaign that was started by parents and grandparents whose families have been affected. They are on a mission to get the world “Glowing Gold” and shine a spotlight on childhood cancer.

The group has been inviting childhood cancer charities to unite in the goal of raising the profile of childhood cancer by “glowing gold“ during September (Childhood Cancer Awareness Month) and spread awareness of the early warning signs and symptoms to aid earlier diagnosis and detection.

The campaign has had an incredible impact in Scotland and globally and has seen more than 200 famous landmarks and buildings sign up to light their facades in gold, including Edinburgh Castle, the National Galleries and St Andrew’s House.

Mr Lochhead said: “I am proud to be supporting the Glow Gold campaign to raise awareness of the symptoms and signs of childhood cancer and I hope that everyone in Moray will join me in Glowing Gold for the rest of September.

“The support that Glow Gold has gathered is incredible and I will do all I can to help support this important campaign, and families affected by childhood cancer in Moray and across Scotland. It is absolutely key that parents know what to look out for and I encourage everyone to take the time to find out more about the symptoms linked to childhood cancer.”

Moray mum Gail Paterson, whose daughter Eileidh is undergoing treatment for neuroblastoma, commented: “The aim of the Glow Gold campaign has been to raise awareness of childhood cancer and the number of families affected. Eleven children and young adults are diagnosed with cancer in the UK every day – it is vital that parents are empowered with the knowledge needed to pick up the signs and symptoms early.

“By the time Eileidh was diagnosed she had a primary tumour in her adrenal gland filling half her abdomen, with secondary tumours in her pancreas, lymph nodes, bone marrow and jaw. After fundraising over £100,000, she then started a clinical trial in USA to try and stop relapse, which unfortunately didn’t work as she relapsed in May this year, with a tumour in her jaw again and in her bone marrow.

“She has now had five more cycles of very harsh chemotherapy so far, which is working, but unfortunately her doctor says she will most likely relapse again. We will now have to start fundraising for another clinical trial abroad to try and hopefully stop this happening again.

“If I had been aware of childhood cancer and what symptoms to be aware of, perhaps Eileidh’s life over the past two and a half years could have been entirely different. She could have had a normal four year olds life now, playing with friends or going to nursery.

“We would be looking forward to her starting school next year, instead of going from scan to scan, praying it hasn’t returned. Awareness of childhood cancer and the symptoms is absolutely vital.”