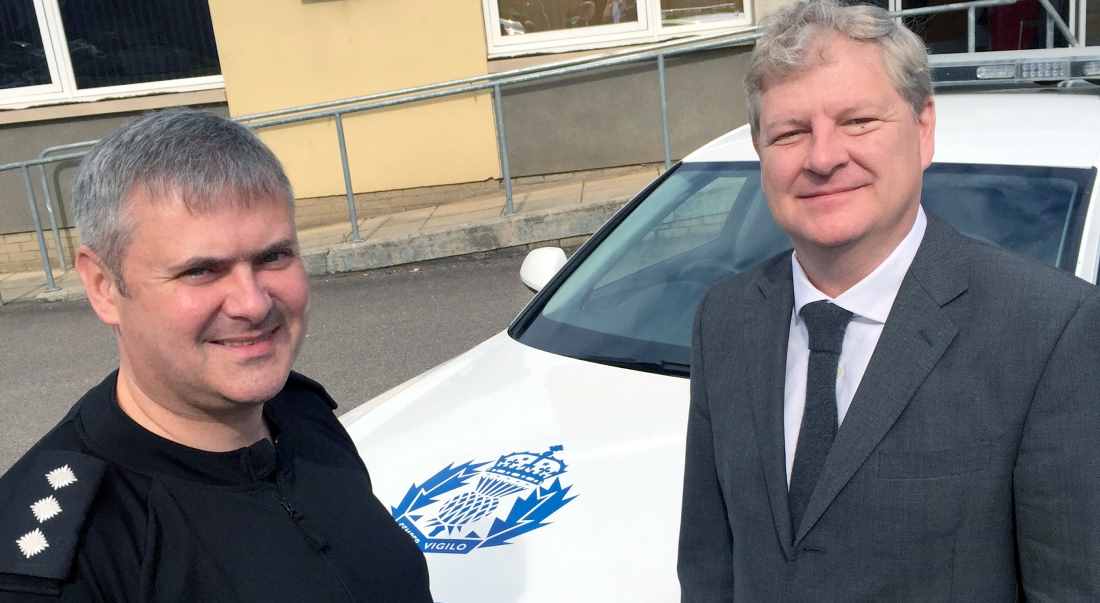 ROAD SAFETY IN MORAY was top of the agenda when Moray’s MP called in at the Moray HQ for Police Scotland this week.

According to recent figures gathered by the Parliamentary Advisory Council for Transport Safety (PACTS), Moray enjoys a comparatively low level of road casualties when compared to other UK Parliamentary constituencies.

The statistics are based on the number of casualties who are resident in Moray – with the most recent full year available being 2014, during which there were 126 casualties, including 3 fatalities. This is significantly down on figures from 2009 showing 223 casualties with 6 fatalities.

Angus Robertson MP says that the work of Police Scotland and various safety campaigns is helping to challenge and improve driver behaviour and reduce risk on our roads. With casualty figures improved significantly, however, it can become harder to keep up good progress and constant reinforcement of the safety message is critical.

The MP said: “These recently published figures show that the risk on our roads is steadily reducing. It would be fair to say that not everyone likes to see the traffic police but the basic fact is that they are doing an important job of saving lives and preventing death and serious injury to people, as well as the heartache for family and friends of victims that goes with that.

“It is not the officers policing our roads that are the bad guys but the people abusing the traffic laws and putting themselves and others at risk.

“There can be many causes of road traffic collisions from drink driving to speed, using a mobile phone while driving or simply not paying proper attention. Almost all collisions are avoidable yet pretty much everyone knows someone that has been in a serious crash.

“The summer is nearing an end and road conditions will be changing as it becomes wetter and colder. People should always be careful on our roads but as conditions change that message is all the more important.

“We all need to pay attention to road safety messages and by doing that we can all be safer on our roads.”

Mr Robertson discussed the figures with Moray’s Are Commander, Chief Inspector Stewart Mackie, who said: “The safety of road users is a key priority for Police Scotland and in the North East and this is reflected in the ongoing work under operations such as CEDaR (Challenge Educate Detect and Reduce).

“We continue to encourage all road users to think about their actions and take care of their vehicles. Challenge poor driver behaviour and report any concerns to police on 101.”