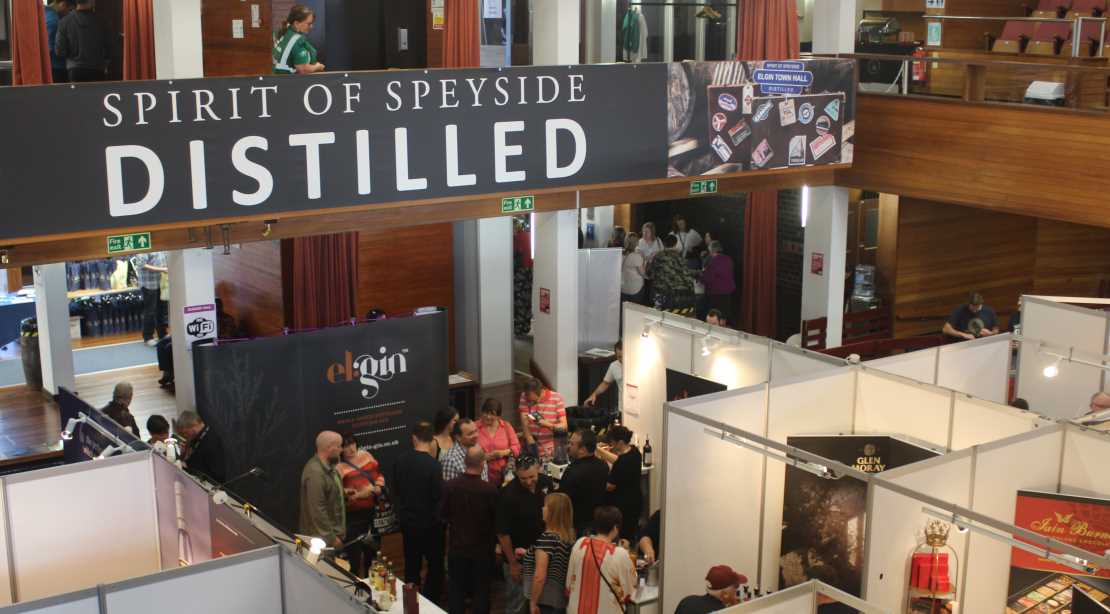 AS ASSIGNMENTS GO it was quite probably the most enjoyable I’ve had the pleasure to have undertaken – to coin the age old phrase, it’s a tough job but someone has to do it.

Spirit of Speyside: Distilled was held over four sessions from Friday to Sunday – and each one was packed to the rafters with excited guests seeing, for what is believed to be the first time ever, representatives from every one of our Speyside distilleries in one place.

It was of course about the whisky. But there was a few things thrown in on the side – and between them they demonstrated the Moray and Speyside position as the most important food and drink region in Scotland.

Attendees were each given five tokens for use in sampling some of the whisky (or gin) on offer – and one for a taste of the local craft ales, plus another token that ensured you had something to eat to balance the alcohol a little.

Biggest disappointment for me was that I had looked forward to chatting with the team behind Beach Craft Spirits and their future Rum project – alas, they were not at the Saturday session I attended. That, however, was the only disappointment felt at a superbly managed event.

I made a beeline for the Speyside Craft Brewery stand for a taste of their new IPA and a chat with Seb Jones over how his cooperative effort with the Glenfiddich Distillery came about.

Now, I’m no beer drinker, having been one of those people who put lime in my lager when I was young and impressionable. But this ale – well, it was simply superb, a fresh drinking experience that sent my palate winging off in directions I never thought possible.

Right next door was the aforementioned Glenfiddich – and the whisky that many will have on their Christmas wish-list, it having been matured in the very barrels from which Seb’s IPA was created. Trust me on this – those who find it in their stocking will not be disappointed.

The biggest issue for me – and all visitors I guess – was the mind-boggling array placed before them. What was next? For me it was the Balvenie and a fine, fine 17-year-old that I had not yet had the pleasure of tasting (I have pretty much all the variants from this distillery having been a massive fan for 30 years). A full bottle is on order!

A Glen Grant was then duly sampled as was an Aberlour – the latter pointing out to me that they do not publicise their whisky as much as other distilleries do – “It speaks for itself much better than we can” – I would certainly not disagree with that.

Having discovered Gin recently via the output from Gordon Castle (who were too busy each time I passed by), I was well taken with what I’d need to name as the star of the show – the team behind El-Gin, who have perhaps not shouted their product from the rooftops so much but certainly should do, it is simply sublime.

My final star mention though does not go to any of the beers or spirits on show – it goes to the Cairngorm Leaf and Bean, and their utterly wonderful Coffee. I discovered this star of Moray at an event in Lossiemouth over a year ago – and have been stocking up ever since, not to put too fine a point on it this is the ‘fuel’ behind insideMoray!

Overall then there was little doubt left in my mind that the first ever Spirit of Speyside: Distilled has won the day and simply must return on an annual basis. I would suggest better use of the space at the Elgin Town Hall, with a bit more on show upstairs (although the individual demonstrations/lectures up there were great, they were accorded too much space in my view).

Festival chairman James Campbell said: “We want this to become as much a tradition as the Spirit of Speyside”. Delighted to hear that, because this is an absolute, slam-dunk winner.