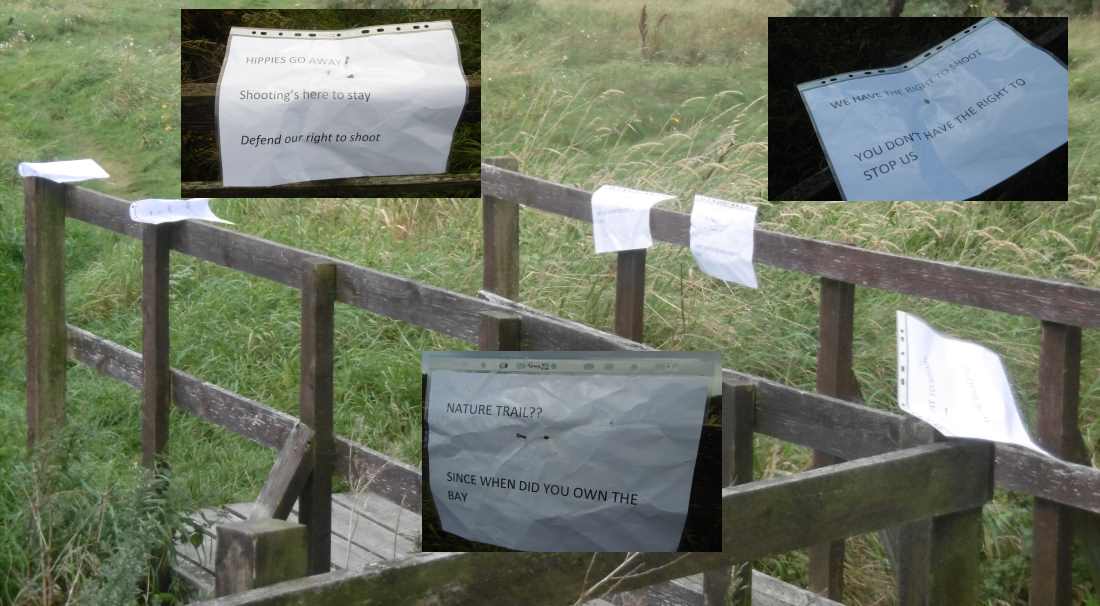 MEMBERS OF THE PUBLIC using the Findhorn Bay area are being threatened and intimidated by those fearful for the future of wildfowl shooting.

Another notice challenges plans by some local people to create a nature trail, proclaiming “Nature Trail?? Since when did you own the Bay”

The notices have appeared in the days following Moray Council’s decision to accept an offer from the national body for shooting to negotiate the terms of future use of the area with the committee controlling the Findhorn Bay Nature Reserve.

Local Spencer Julian said that the notices are the latest attempt by those using the bay for wildfowling to intimidate other users of the area: “The Eastern and Southern areas of Findhorn Bay is popular with walkers, orthinologists, nature lovers etc. – and the shooters know this.

“They also know that they cannot shoot when a person or persons pass by them – and that these persons that pass by them could also unintentionally disturb the birds that they intend to shoot. So in order to avoid this, the shooters confront the non-shooting public with intimidating glares and stares during the rest of the day when there is no actual shooting being carried out.

“It is obvious that the individual or individuals responsible for these posters are not happy with a proposed Nature Trail being built in the Bay. This Nature Trail if built, will allow wheelchair users access to the bay.

“The proposed nature trail is being done by the Kinloss Village Floral Club, not Friends of Findhorn Bay and not the Findhorn Foundation and not by anyone else for that matter. The shooters must realise that Findhorn Bay is not for their use only – it is there for everyone to enjoy, and they are just going to have to start getting used to it.”

Earlier this week representatives from the British Association of Shooting and Conservation insisted that they were prepared to meet the Friends of Findhorn Bay campaigners ‘halfway’. However, the notices are being seen as further evidence that some elements of the shooting lobby have no intention of giving up any of their existing rights.