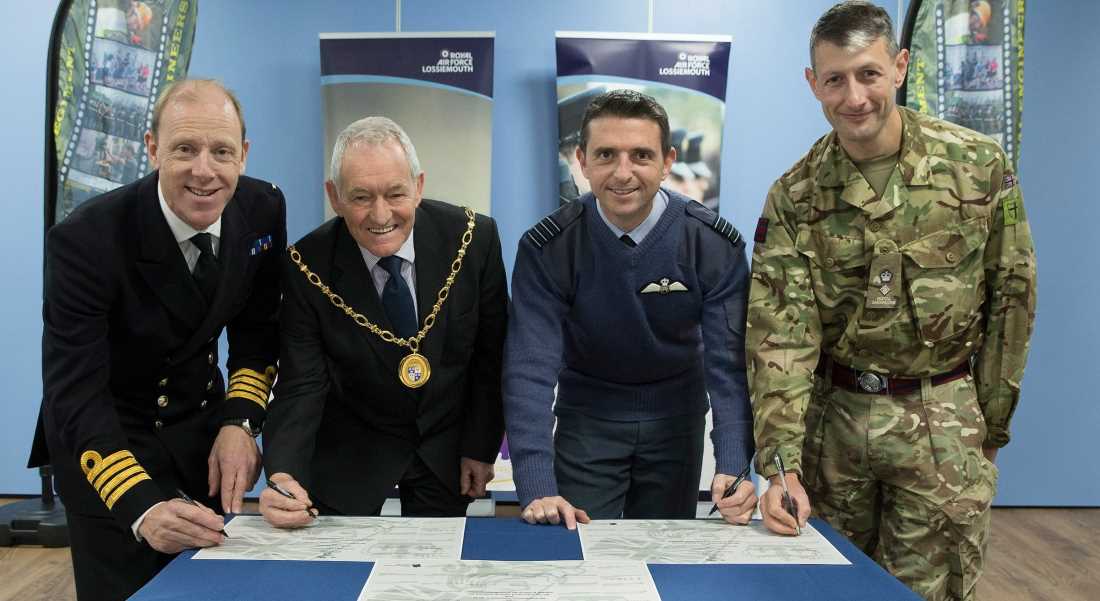 MORAY COMMUNITY LEADERS have joined with Armed Forces commanders in signing a renewed covenant enshrining fair access to health, education, employment and housing to service personnel and their families.

Now members of the Moray Community Planning Partnership will meet at RAF Lossiemouth with RAF, Army and Royal Navy representatives to reinforce the commitment to the covenant.

The renewal follows major changes to the community since the original covenant was signed in 2012, particularly the arrival of the Army to Kinloss Barracks.

The Moray Community Planning Partnership – which brings together all public sectors including education, health, the emergency services, the environment and the economy to engage with the communities it represents to plan and coordinate Moray’s public services – has also experienced changes since then, with tsiMORAY now representing the voluntary sector.

These changes, coupled with the recent announcement of the Ministry of Defence’s continuing development of RAF Lossiemouth as a base for the new P-8A Poseidon aircraft, make re-signing the Armed Forces Covenant and reinforcing Moray’s commitment to service personnel, veterans and their families particularly relevant.

Moray Council Convener and chairman of the Moray Community Planning Board, Councillor Allan Wright, said: “This is an auspicious day for Moray – senior representatives from all the public sectors in Moray and the military have come together to declare our continued support for the close ties and friendship between the armed forces at our two bases and the communities.

“It is a privilege therefore, for me to re-sign the Covenant on behalf of the RAF Community in Moray, both serving personnel at RAF Lossiemouth, their families, veterans and air cadets locally. Our sincere thanks must go to the Councillors, charity organisations and Government service representatives who have showed their commitment to supporting us today.”

A recent success for the Armed Forces Covenant in Moray has been the Council’s introduction of a pilot scheme, in partnership with the General Teaching Council of Scotland, to enable conditional registration for teachers who qualified outside of Scotland.