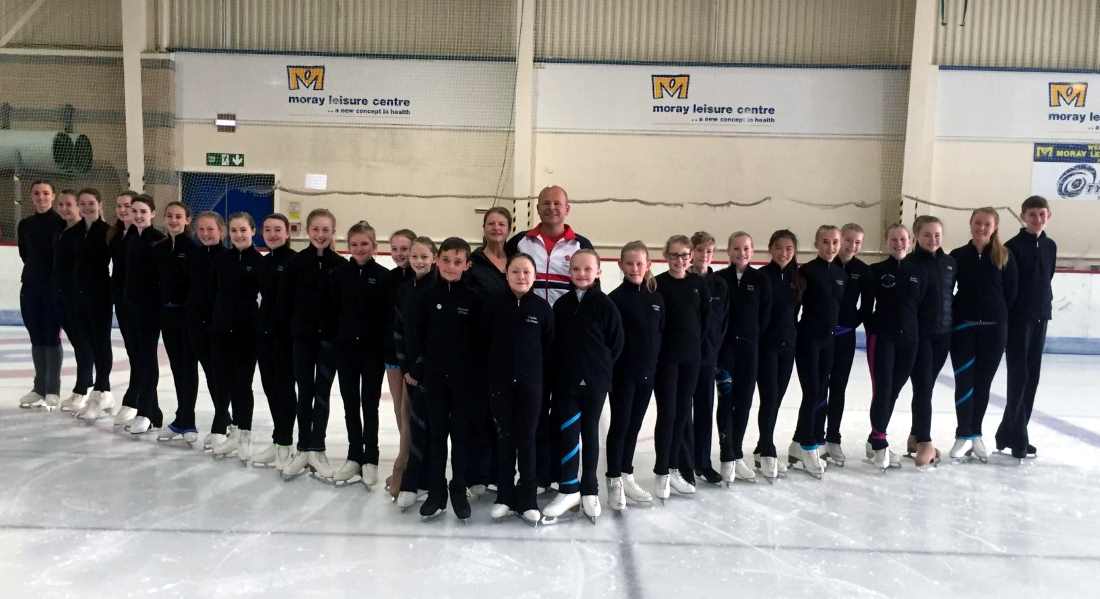 The local club continued to show themselves as one of the best in the nation with leading the way Elgin’s two-time Scottish champion Rowena Mackessack-Leitch.

Two impressive double axels and a range of combination jumps and level four spins gave her a very high score of 78.99, which only a few female skaters in the UK have ever achieved. This success comes after recently winning two silvers at a major event in Oxford and also a gold and silver at the Skate Southern event in London.

Gold was also won by Elise Green in the level 3 ladies competition with a strong performance to ‘Cats’, with teammate Madison Mitchell narrowly missing out on a podium finish. Moray also took the top two spots in the level 1 event with Natasha Morrison winning gold and Elysia Glass silver.

More silvers were also won by Buckie’s Emma Marandola in the level 2 event and Elgin’s Philippa Adams in the beginner ladies competition.

Ruby, from Elgin, recently qualified for the forthcoming British Championships in Sheffield after an impressive performance at a national qualifying event. Kiernan O’Shea from Mulben also won bronze in the level 1 men’s competition.

The medal wins come hot on the heels of another successful outing at the recent Skate Ayrshire event where the club won eight medals including four golds.

The club is, however, still in deep shock after one of its stars was involved in a serious car accident a week ago on the way to a GB team training camp in Ayrshire.

Kingston’s Emily Dale had recently qualified for the British Championships and a place on the GB team as a result of her impressive performances this year. Emily and her parents were hospitalised after the crash and her father Stuart remains in hospital in Dundee.

The skaters are all trained by brother-and sister coaching team Sue Summers-Farrell and Graeme Summers. The coaches said: ‘We’re so proud of yet more medal successes by the team.

“It’s been a terribly difficult time for the Dales and indeed for all of us, and the skaters have been amazing in the way they’ve coped and supported the Dale family. We help each other in our club and the Dales have been overwhelmed by all the support they’ve received locally and from all over the UK.

“We’d like to dedicate our success in Aberdeen to Emily and her family and wish them the very best for a speedy recovery. Although Emily will miss the British championships we’re looking forward to seeing her back on the ice soon.”

Moray Figure Skating Club takes pride in being a welcoming and inclusive club for all ages and abilities. The club’s popular learn-to-skate classes are held every Saturday from 10.45 to 1.15 at Moray Leisure Centre.