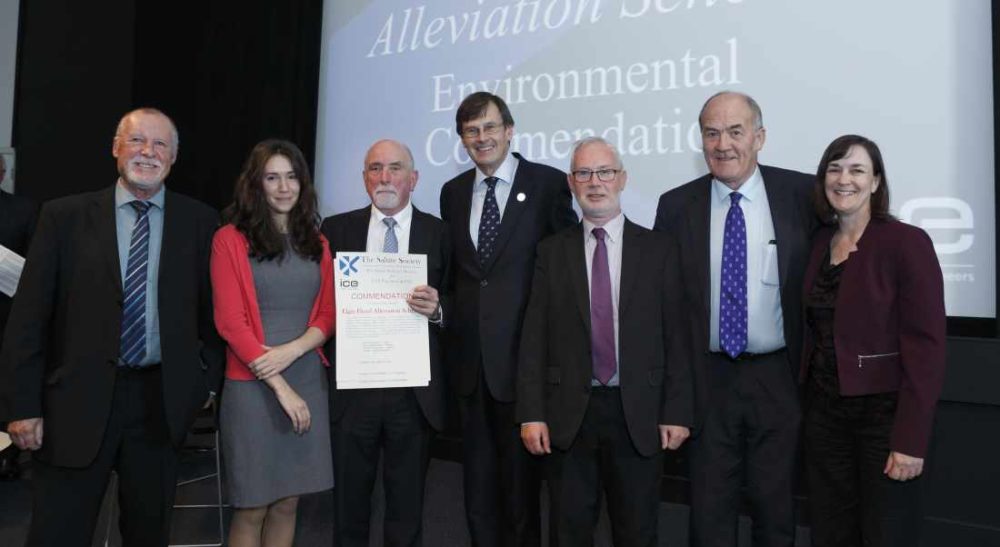 ELGIN’S FLOOD ALLEVIATION project has scored a commendation for its delivery of a range of benefits to the local community and businesses.

The largest ever flood scheme in Scotland undertaken for the Council by Royal Haskoning, Morrison Construction and Arcadis, received the commendation at the Saltire Civil Engineering Awards.

Held at the National Museum of Scotland, the awards recognise engineering excellence, innovation and achievement in Scotland.

The commendation presented to the team behind the project said that it had demonstrated the benefits of a fully integrated project team “working together under a target cost contract”, adding that the scheme was “a well thought through project providing a modern and pleasant civil engineering solution which is environmentally and visually pleasing and well finished.”

The Elgin scheme has helped to transform the physical and social environment thanks to a new 6km cycle way between Lhanbryde and Elgin, new footpaths and other recreational facilities. The project has also incorporated the renewal of roads and bridges.

Chair of Moray Council’s Flood Alleviation Sub-committee, Councillor George Alexander, who was at the awards event said: “There is no doubt that the Elgin project, like others that have been successfully completed on time and under budget in Moray, has made a huge impact on people’s quality of life.

“Not only has the threat of flooding been drastically reduced in their homes, but their environment has been made more pleasing and a number of facilities created for enjoyment of the area.

“I congratulate the team that have steered these schemes to completion, and I’m pleased to see their work recognised in this way by receiving a commendation in the highly esteemed Saltire Civil Engineering Society awards 2016.”