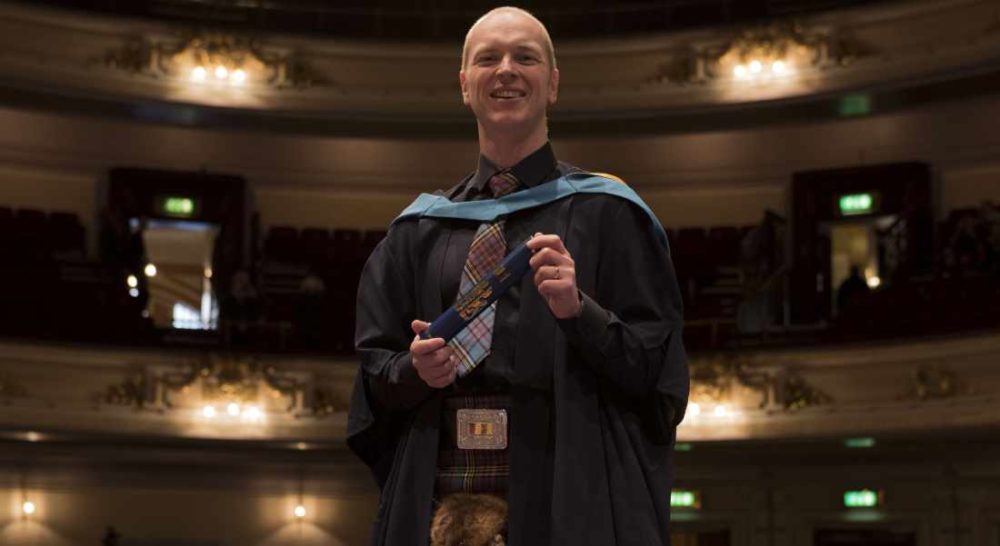 A MORAY MAN was among 560 proud students who lined up at the Usher Hall in Edinburgh on Saturday to be conferred with degrees gained form the Open University.

RAF airman Jack Provan, who lives in Elgin, gained a Bachelor of Arts (BA) with Honours in youth work after deciding it was a road he wished to take after undertaking a seconded role in recruitment that involved working with schools and youth organisations.

Mr Provan, 38, joined the RAF at 17 and it was the discovery that he enjoyed supporting young people that led to his seeking to improve and learn more about the subject.

Supported by the RAF, he decided to study Youth Work with The OU and worked with, and volunteered for, a variety of charities focused on helping young people.

Jack has accepted a voluntary director’s role at Elgin Youth Development Group – and having studied with The OU at postings all over the world, he is due to leave the RAF in 2018 after more than twenty years of service.

Jack explained: “I just always felt with more knowledge and a bit more training I could do more. I’ve always felt the RAF was more than just a job and is actually doing good in some way. In youth work I’ve found something that gives me the same sense of pride, although in a different way.

“My OU study has completely changed where I want to go with my future career. When I first started, it was to improve my face-to-face practice with young people. I now feel like I can make even more difference by managing and supporting youth workers with their practice and by influencing the policy that affects young people.

“That may be within a voluntary organisation or a local authority, or even government level one day.”
Susan Stewart, who is the Director of The Open University in Scotland, added: “The students graduating today have worked incredibly hard to achieve their degrees, fitting their learning around the other commitments in their lives, such as work and family.

“Jack is a wonderful example of that dedication and commitment and we’re extremely proud of everyone graduating with The Open University in Scotland today.”