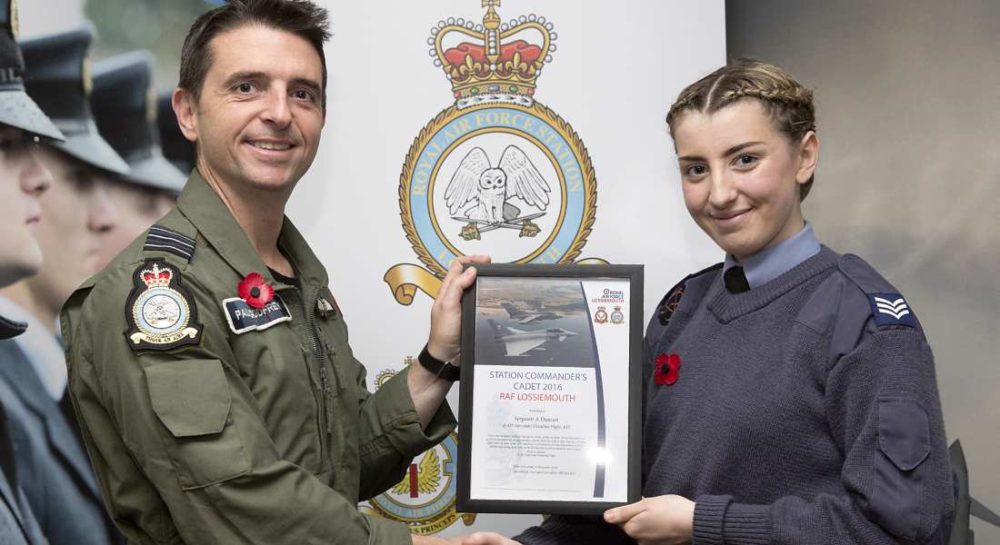 A HARD WORKING and dedicated Air Cadet form Aberlour has been appointed as the ‘Station Commanders Cadet’ at RAF Lossiemouth, assisting the CO at civic and ceremonial duties.

Cadet Sergeant Ashleigh Duncan joined 423(Speyside) Detached Flight ATC three years ago – and since then she has been involved in a myriad of activities.

These have included representing the squadron at hockey, swimming, athletics, cross-country and netball.

Ashleigh also attended Altcar Band Camp, where she gained her musician badge, and has completed a ‘HeartStart’ first-aid qualification. As if that was not enough, she has also achieved here Bronze Duke of Edinburgh scheme award.

RAF Lossiemouth station commander Group Captain Paul Godfrey said: “The ATC is a fantastic organisation that allows children and young adults to grow both as individuals and as members of the community.

“I am delighted to be able to appoint Ashley as the new Station Commander’s Cadet as she demonstrates all the qualities the RAF hold in high esteem and has done a huge amount to benefit our local community and fellow cadets in a very short period of time.”