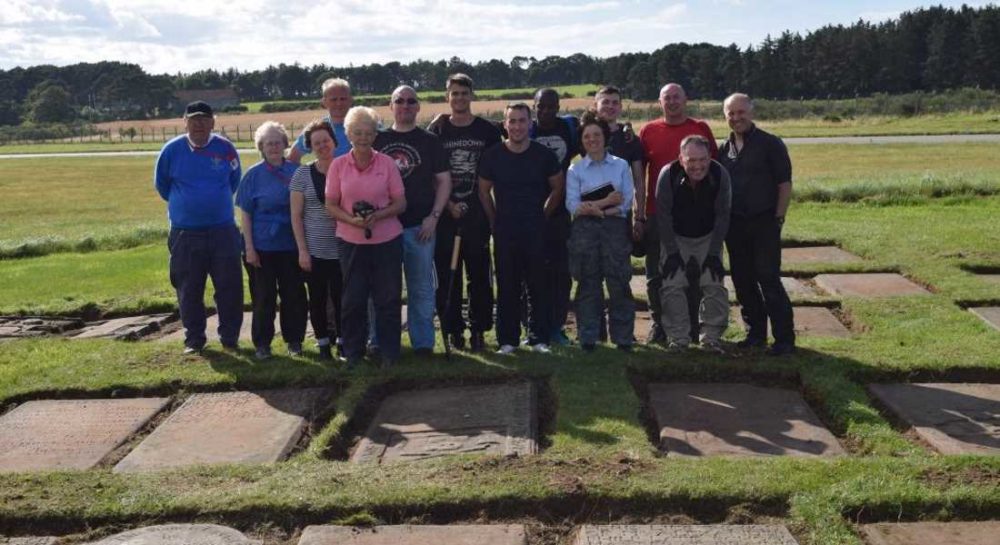 THE DEDICATION AND DETERMINATION of one man at RAF Lossiemouth is being credited with ensuring that a little known graveyard within the confines of the Moray base is not forgotten.

Few frontline air bases in the UK have a burial ground in the middle of the site – but at Lossiemouth the base was built around the site of the old Drainie Church which fell into ruins in 1825.

While the church was no longer used, the graveyard on its site was right up until the 1920’s – before eventually the land was acquired by the Air Ministry in 1938 and RAF Lossiemouth was created.

While routine airfield ground maintenance does ensure the site is not completely overgrown, nature will run its course and the graves can become enveloped in grass – and that is kept at bay by Warrant Officer Andy Kidd, who organises a group of ‘volunteers’ on a regular basis.

With the support of the Moray Burial Ground research group, WO Kidd and his team halt any encroachment onto the 67 graves, the team recently getting to work again over two days.

WO Kidd said that he remains determined the Old Drainie graveyard is maintained and respected: “The site is over 350 years old, and as the custodians the Royal Air Force has a responsibility to future generations to ensure that the rich history of the Kirktoun of Drainie is not lost or forgotten.”

With the graves and foundations now being over 300 years old great care was needed to ensure that this historical site was not damaged – no metal tools could be used on the stones in case the concrete cap or ornamental patterns were damaged.

A border had to be carefully dug around each of the graves and the grass removed so that the weeds could be controlled. The graves were cleared of grass cuttings using a stiff broom and then scrubbed with wooded bristled hand brushes before the lettering was cleaned with a wooden skewer.

Each grave was also photographed for posterity. The same care was taken along the concrete capped church and graveyard wall foundations.