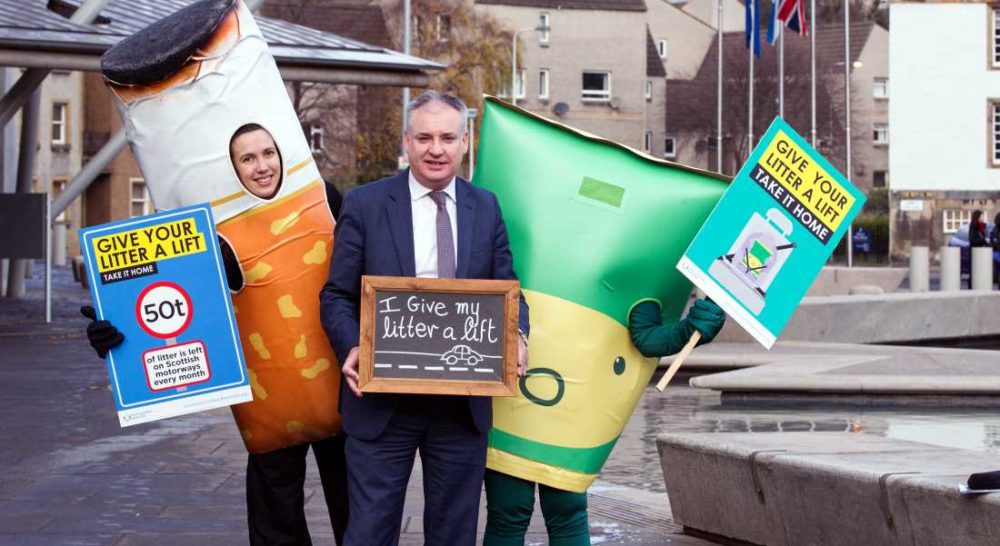 A NEGATIVE IMPRESSION of Moray is being created by litter dumped on roadsides and beauty spots around the region.

Now environmental charity Keep Scotland Beautiful is determined to fight back – and they are being supported by SNP MSP Richard Lochhead and Tory MSP Douglas Ross.

Keep Scotland Beautiful has launched a campaign that hopes to tackle the behaviour of a minority that is ruining the way visitors see our roadsides, with a recent litter monitoring exercise by the charity showing that over 96% of Scotland’s main roads and iconic routes are affected by litter.

During 2016 52% of Scottish adults have seen someone throw litter from a vehicle and not picked it up – so the campaign is urging road users to take personal responsibility for their litter, encouraging them to give their litter a lift, and take it home.

Mr Lochhead said: “Moray is a beautiful place but it can often be spoiled by roadside litter and I know that many constituents are incredibly fed up of others making their communities look untidy.

“It’s astonishing that more than half of Scottish adults have witnessed someone throw litter from their car and then fail to pick it up. Having been involved in local efforts to clean up our communities and having recently helped set up Moray’s litter forum,

“I’m delighted to get behind Keep Scotland Beautiful’s campaign to tackle behaviour which is spoiling our roadsides.

“We can all play our part in keeping Moray’s roadsides litter free and I would encourage all road users locally to give their litter a lift and take it home.”

Douglas Ross is also supporting the campaign, saying: “It’s always disappointing to see rubbish discarded by the roadside, all too often just a short distance from a layby where rubbish bins are provided.

“The negative impression this gives for our communities can be very damaging as we try to encourage more people to visit and come back.  There are also the major environment issues caused by irresponsible littering and the impact it can have on wild animals.

“The Keep Scotland Beautiful campaign is something we should all get behind to encourage people to take a greater responsibility for the environment and to take their litter home for disposal.

“We are lucky to live in such a beautiful area and must do all that we can to promote the very simple message – give your litter a lift, take it home!”

Derek Robertson is the chief executive of Keep Scotland Beautiful. He added:“As a direct response to our country’s roadside litter problem, we have launched this campaign with a wide range of stakeholders including industry, the public sector and charities, and we are very grateful for Richard Lochhead’s support.

“We recognise that to tackle this disgusting and illegal habit, we all need to work in partnership, to raise awareness of the problem of throwing litter from a vehicle, and to trial innovative solutions to change current littering behaviours.

“The message is simple – give your litter a lift, take it home!”