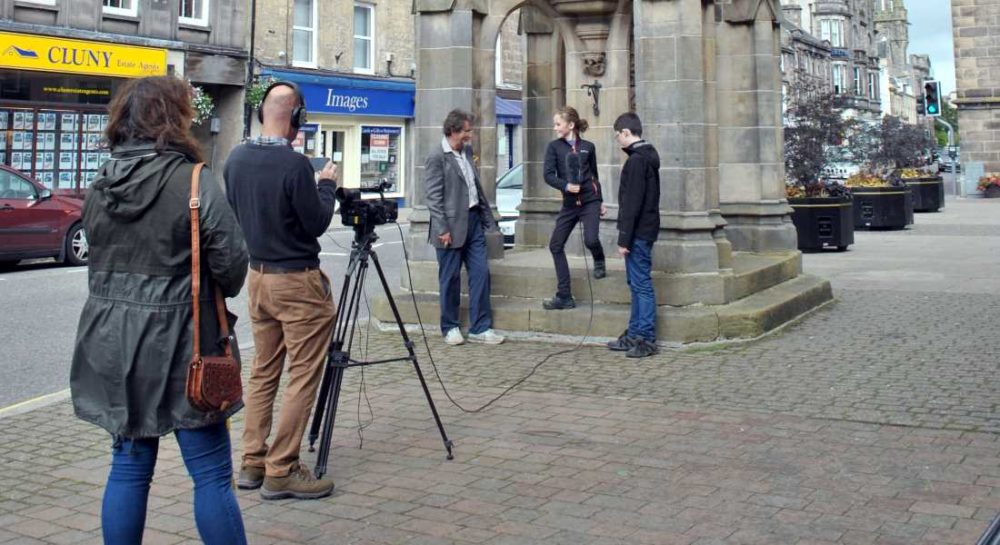 PEOPLE IN FORRES are being offered a first look at a movie project that has seen young people and professional film makers working in the community for over a year.

The resulting film – ‘The Royal Burgh of Forres’ – is to be premiered in the Forres Town Hall this evening at 7pm.

It is the latest in a series of project undertaken in Forres and Lossiemouth by Creative Visions Moray led by artistic director Yvonne Findlay. The group have been working alongside Filmcraft Moray and the Berryburn Community Fund to produce the insight into local life – starring those who know best about that, the people of Forres.

“This film explores the history of Forres and is the result of a year-long intergenerational community project,” Yvonne told insideMoray, adding: “Pupils from Andersons School and Forres Academy have taken part in the production.

“The film offers a behind the scenes look at events, voluntary organisations and local business, and features archive photographs from the Forres Heritage Trust and old cine footage of the 1930’s by David R Forrester that offers a glimpse of how Forres was in the past.

“It is hoped the launch evening will offer the people of the town an opportunity to gather together and celebrate the history and community. Ronnie Thain, whose music features in the film, will perform with friends after the screening.

“Forres Heritage Trust will provide an exhibition of old photographs and there will be an opportunity to chat with refreshments.”

Tickets for the screening can be picked up today at The Hub on Tolbooth Street with any remaining available at the door.