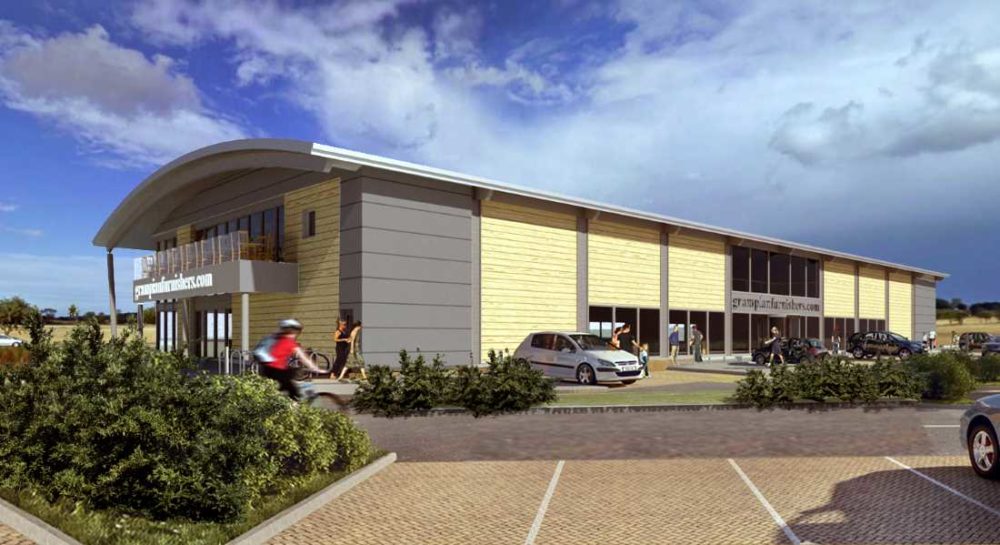 AFTER TWO YEARS searching for a larger premises local independent retailer Grampian Furnishers has this week submitted plans for a new 30,000sqft store.

The firm is seeking to invest £3.5million and remain in Moray after considering relocating to sites close to Aberdeen and Inverness.

Their proposal is for a high-quality building at the Gateway to Elgin, which involves demolishing a derelict steading, cottage and former dairy at Linkwood. Plans include retail space, office space and a café with parking for 110 vehicles.

Included in the application is the completion of the road infrastructure on the current site, which would open up another two plots. The large and prominent site was zoned for industrial use in the last Moray Local Plan (MLP) and has KFC as it’s only occupier at present.

There are other businesses in discussions with the landowner in the hope of creating a mixed-use site that would provide more jobs and commerce in Elgin.

Grampian Furnishers, who are currently based in the former Regal Cinema in Lossiemouth, are seeking to expand their floor space and attract more customers to the area. Originally founded in 1975 in premises in Elgin’s Lido Close, the business moved to Queen Street in Lossiemouth in 1981 before relocating the cinema across the road in 1986.

“I guess if this comes off then we will have gone full circle and be coming home to where it all started,” Managing Director Royce Clark commented.

However, the application is not a straightforward one. The business is seeking a departure from some of the policies of the Local Development Plan as the application site is currently allocated for business and industrial use rather than retail use.

Mr Clark said: “We are asking for the Council to look at this as a significant business investment in Moray. We wish to retain investment in this region and also attract more spend into the area, this site is the only one that suits our needs in Moray and our preference is to keep the business operational here if it is at all possible

“We have exhausted all other avenues of existing buildings both in and out of the town centre.”

Confirming that he anticipates up to 50 new jobs will be created by the new store, Mr Clark added: “If the planning process is successful then we have already been in discussions with local builders Robertson’s, who we anticipate will carry out the project for us with construction starting in the summer of 2017.

“If our proposal is unsuccessful then we will need to look again at options on the outskirts of Inverness and Aberdeen.”