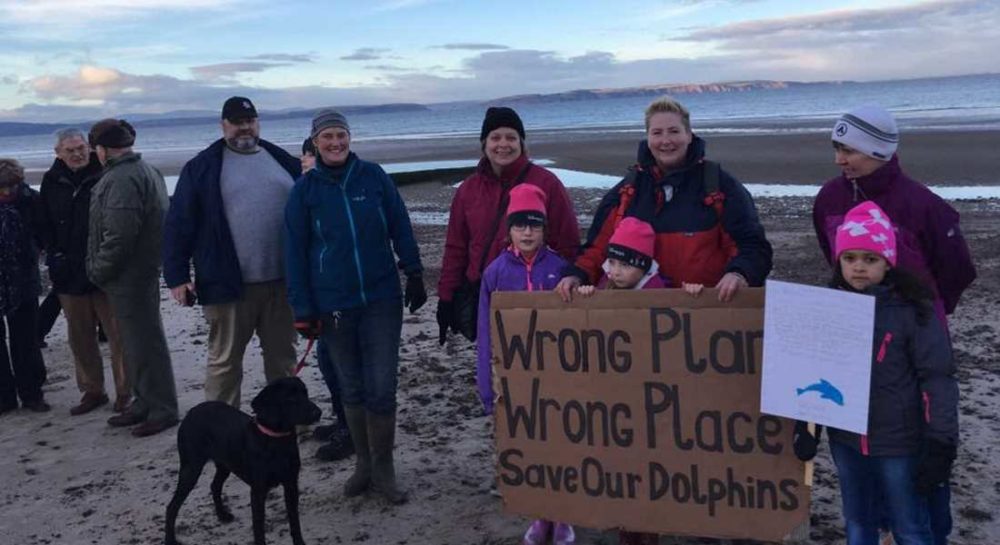 HUNDREDS OF PEOPLE have turned out on Nairn beach at the weekend – many from Moray – to protest continued plans for Ship-to-Ship oil transfers on the Moray Firth.

The protests came as it was revealed the Cromarty Firth Port Authority (CFPA) will put in an entirely new bid to create transfers on the Firth itself – despite furious reactions from communities that believe they post a major threat to the marine environment.

The CFPA first applied over a year ago for permission to expand existing ship to ship transfers within the port itself to allow larger transfers on the Moray Firth at the mouth of the Cromarty Firth.

That, however, was a step too far with communities on both sides of the Firth launching campaigns to protect local beaches and marine life – in particular the resident and visiting Dolphin and Whale populations.

Determined to measure public support for their protest, the joint campaign group Cromarty Rising organised a protest on Nairn beach – and were delighted when at least 500 people turned out, representing communities all along the Moray Firth.

A driving force throughout the campaign over the last year, Black Isle councillor Craig Fraser, said he was delighted at the turnout: “This application is not acceptable – it is the wrong plan in the wrong place and we have had no consultation. It represents a shocking dereliction of duty as a ‘trust’ port.

Another strong campaigner against the plan has be regional Green MSP John Finnie, who added: “This demonstration shows the depth of feeling people have about this issue. There is growing awareness of this and people understand that what is under threat is not only the precious marine coastal environment but also the livelihood of those who depend on tourism.

“Now I hope that the Scottish Government appreciate this strength of feeling – this simply cannot be allowed to go ahead.”

The CFPA first published their plans just before Christmas last year, with many believing the timing was itself a deliberate ploy to avoid inevitable protests. After a year-long discussion, insideMoray understands that they have been told by the Maritime and Coastguard Agency, who would either approve or deny their request, to put in a new application which is expected to be completed at the end of January.

However, the CFPA has refused to allow public access to the revised application for comment by the public – creating even greater resentment, in particular as a Trust port is required to “identify their stakeholders and include them in formal consultation on significant decisions” under Scottish Government guidelines.

Meanwhile the CFPA have continued to ignore Community Councils in Moray who they appear to not regard as worthy of consultation over their plans – despite their own initial application highlighting that beaches such as Findhorn and Lossiemouth could be badly affected by any oil spills resulting from their planned activities.

Last night the CFPA issued a statement defending their record: “We have a 100% safety record for [land based] operations with no spills in over 30 years. More than 175million barrels of oil have been transferred in the [Cromarty] Firth.

“Ship-to-Ship transfers are a commercial necessity for world trade – they take place every day all over the world and are not considered exceptional or high risk by governments, oil companies, ship owners or the United Nations’ International Maritime Organisation.”