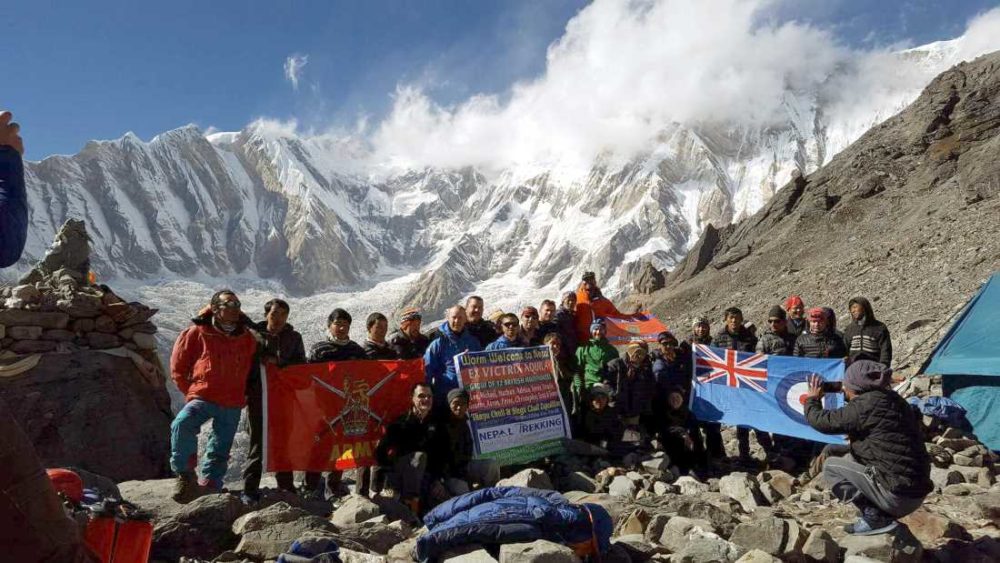 TREACHEROUS CONDITIONS FACED a team of 11 Moray servicemen and women when they took on a Himalayan mountain range recently.

The team from RAF Lossiemouth were taking part in Exercise Victrix Aquila – and despite the conditions managed to reach the summit of Tharpu Chuli on the Annapurna Range in Nepal.

However, plans to take on Singu Chuli had to be abandoned as access has been impossible since the Nepalese Earthquake in May last year.

Leading the expedition was Sergeant Lee Birbeck, who said: “Tharpu Chuli was definitely not a trekking peak as stated and was technically very difficult. Crevasses and snow bridges peppered the glacier, and then there was a 200 metre ice climb interspersed with rock bands before achieving the ridge.

“The physical and mental challenges inherent in modern military operations are very similar to those our personnel are subjected to through AT expeditions.

“By embracing bold and daring challenges, in this case involving transit to and operating in a very hostile and remote environment, undoubtedly prepares our people for the rigours associated with military operational challenges.

“Stretching ourselves mentally, physically and culturally, often having to integrate and rely wholly on unfamiliar host-nation support, these skills are of paramount importance on deployed operations.”

Squadron Leader Si Moore, who is the Officer Commanding RAF Mountain Rescue Service, acted as one of the specialist leaders on the expedition.

He said: “For some, this expedition was a once in a lifetime experience and it certainly provided everyone with both mental and physical challenges.

“The determination to push on when the body is demanding extra oxygen and telling you it hurts, whilst also dealing with the extreme cold and concentrating on the technical aspects of personal safety, proved the teams fortitude.  It was fantastic to see the elation on everyone’s face after summiting. Reaching the summit of Tharpu Chuli at 5700m (18,700ft) was testament to the team’s strength of character and they should all feel extremely proud of themselves.

“From my perspective, the teamwork and cooperation within the group was excellent and made this a very pleasurable expedition.”

Base Support Wing OC, Wing Commander Dan Lunnon-Wood, said that the exercise was the culmination of a huge amount of effort and training by every member of the team over the last year.

He added: “They should be rightfully proud of their achievements – the benefits to the Service of adventurous training exercises such as this are immeasurable.

“The courage, determination and teamwork required on this expedition are directly comparable to those required on operations, and the ability to make timely decisions in a high risk and remote environment prepares personnel for the leadership they will require in their military careers at a later date.

“All of these components were clearly evident on this outstanding adventurous training exercise, and we will continue to support endeavours such as this for all members of the RAF.”