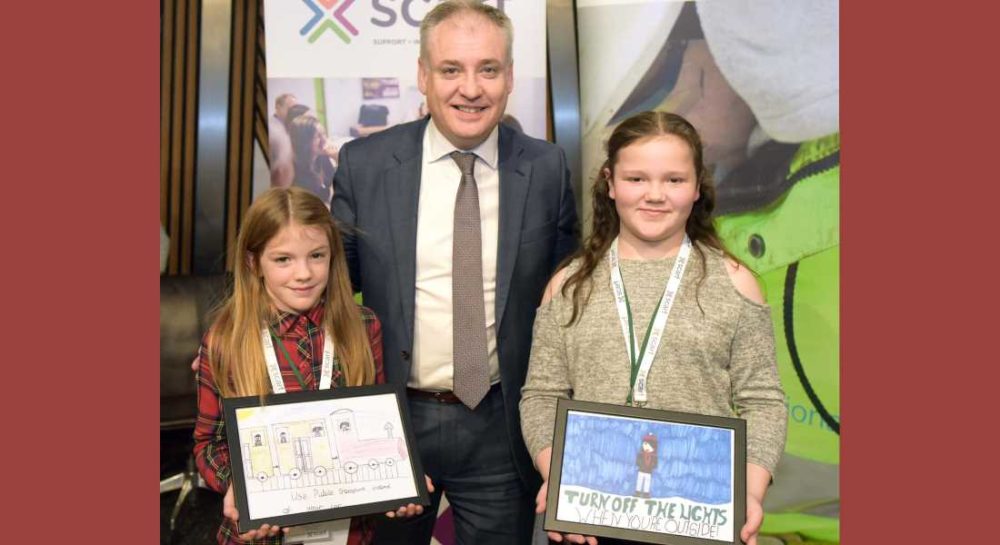 TWO MORAY PRIMARY SCHOOL children were special visitors to the Scottish Parliament this week where they received their prizes for winning entries in the 2017 Scarf calendar competition.

Imogen Taylor from Mosstodloch Primary School joined Caitlyn George, who attends Botriphinie Primary School to be presented with their awards by Mark McDonald, the minister for Children and Early Years.

Imogen and Caitlyn were among 13 children from the north east of Scotland who came through after being asked to draw pictures that had an energy efficiency theme, highlighting action that can be taken to help the environment and to tackle climate change.

The winning pictures will now be used in Scarf’s 2017 calendar, which is funded by National Grid and will be distributed throughout Scotland.

“The competition is a great way to get children thinking about climate change and the environment. Imogen and Caitlyn’s winning designs are brilliant and it is a fantastic achievement having their pictures part of the calendar that will be distributed all over Scotland.”

Mark McDonald MSP added: “It is a pleasure to present the prizes for the 2017 Scarf calendar competition and see the hard work of each pupil to raise awareness of such a vital issue.

“Educating the younger generations to be energy efficient now will be key to tackling climate change in the future – it will also help them to live in warmer and healthier homes.”

Thane Lawrie, Chief Executive of Scarf, underlined the importance of saving energy as it reduces the impact on our environment as well as helping to cut costs for hard-pressed families.

He added: “The calendar competition is a great way for our young people to develop an understanding of the issues for themselves and to share their ideas and thinking more widely.

“It also raises awareness among their families and wider communities about the need to make better use of natural resources. I am delighted that National Grid continues to support the competition which has such strong support from schools and young people across north east Scotland.”

Scarf is an Aberdeen-based social enterprise with the aim of eradicating fuel poverty and delivers a range of services to householders, communities and businesses throughout Scotland. For more information visit their website.