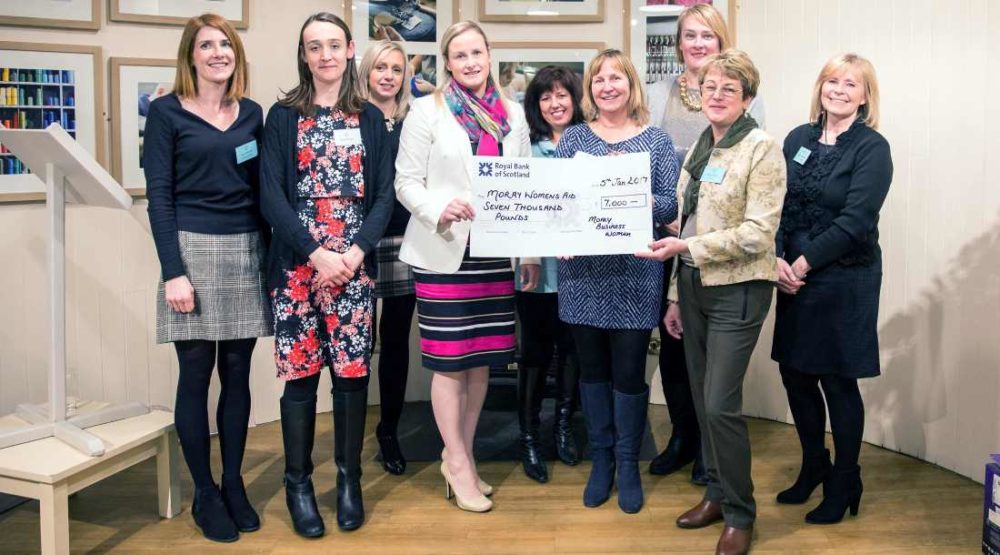 HAVING RAISED THOUSANDS of pounds in recent years for their chosen charities, the lucky organisations selected each year by Moray Business Women’s Club know that they are set for a real boost.

Having thought long and hard over their choice for 2017 it was the Moray Foodbank who came out in front – recognition of their have handled over 1000 referrals and support 1800 people in the region over the last year – 29% of them children.

Mairi McCallum, project manager for Moray Foodbank, said she was thrilled with the news that her charity had been selected: “We are delighted to be chosen as Moray Business Women’s Charity of the Year for 2017 and look forward to working in partnership with them to raise much needed funds and raise the profile of food insecurity in Moray.

“The charity work to a referral system where agencies, such as social work and housing, refer clients in need and we are currently working with over 40 referral agencies across Moray.

“We are supported by a strong team of dedicated volunteers who collect, sort and make up food parcels for distribution and rely heavily on donations from the local community to provide the funds to keep this valuable service running. Becoming the nominated charity for Moray Businesswomen’s Club is a great start to the year.”

The decision was taken at a recent event at Johnston’s of Elgin where four charities pitched reasons why they should be selected to MBWC members.

Marie Smith, president of Moray Business Women said: “With so many deserving applicants again this year, it gets harder and harder to choose a charity.

“We heard from four shortlisted charities and the vote was extremely close. We are delighted to be working with Mairi and the team at Moray Foodbank for 2017 and hope our support helps not just through the money we raise but by increasing awareness of the charity too.”

In 2016, Moray Business Women’s Club raised £7000 for Moray Women’s Aid. The money is raised by holding raffles at monthly meetings with the biggest donation coming for the club’s annual awards ball.
Caroline Overton a MBWC member who also sits on the board for Moray Women’s Aid said: “There are no words to express the magnitude of our thanks to Moray Business Women, for all they have done to raise our profile and for the phenomenal amount of money they have raised for us.

“This partnership means we will be able to support more women, children and young people in Moray with experience of domestic abuse than ever before.

“Moray Business Women have been enthusiastic, dedicated and compassionate and went about all their fundraising with impressive tenacity. Thank you to every single member of Moray Business Women, and their businesses for all you have done.”