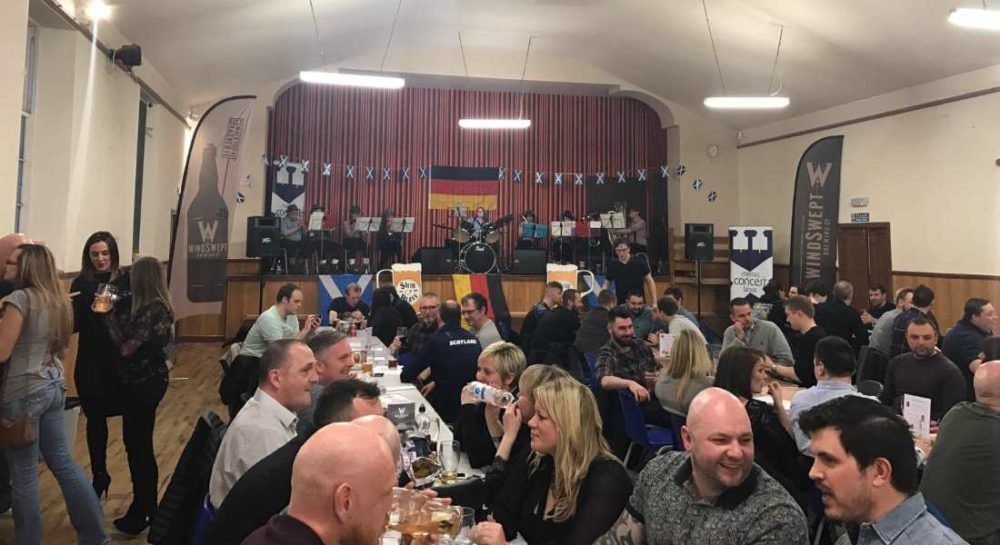 BEING DIAGNOSED WITH Bowel Cancer sparked a bid by Moray musician Glenn Munro to find a way of thanking the Moray medical staff who provided top-class care and attention.

Now Glenn Munro, the found and musical director of Moray Concert Brass, is set to hand over a cheque to Dr Gray’s Hospital – the proceeds from a Christmas concert in Cooper Park in December.

Mr Munro was diagnosed with the cancer last year and immediately underwent treatment at Ward 5 in the Moray hospital.

He said: “While on the Ward I noticed that they could really do with some new televisions for patients to watch, and as we like to raise money for local charities it seemed like a perfect beneficiary this year.”

The annual Christmas event faced ‘challenging’ weather – but still a large number of people turned out and gave generously to the cause. When that was combined with a generous donation from the Cantare Ladies Choir, it was possible to purchase not only six televisions for the Ward – but they threw in four new radios as well.

Senior Charge Nurse on Ward 5, Tracey Kramer-Taylor, was delighted with the donation to the ward, saying: “On behalf of the Ward 5 team I would firstly like to thank Glenn Munro for his kind words of appreciation about the care that he received whilst he was a patient of ours.

“It is amazing that Mr Munro has gone on to raise so much money for Ward 5 and purchased us the 6 new televisions and 4 digital radios. These have now been installed and are providing welcome enjoyment for current and future patients.”

Meanwhile the Friends of Moray Concert Brass group are celebrating another fun evening at Elgin’s Bishopmill Hall on Saturday, when the band’s German-themed Moray Stein Brass group entertained at the annual Beerfest.

The event was packed out for the third running of the event in conjunction with the Lossiemouth-based Windswept Brewing Company. In previous years the event has raised around £3000 to allow the band to reach audiences throughout Europe.

Mr Munro said: “We have every reason to expect that this year’s Beerfest raised as much as it has done previously. The Stein Brass group does not just play German music – Bohemian Rhapsody and Baggy Trousers are also good songs to get people up and enjoying themselves.

“We have lots of positive feedback and it seems everyone had a good time.”

Funds from Saturday’s event will go towards a tour of Holland being undertaken by the 60-strong band this year.

The band are now looking forward to a number of events this spring including a fantastic weekend of world-class music on June 3 and 4, featuring renowned trumpeters Mike Lovatt and Rex Richardson, to celebrate the 25th Anniversary of Moray Concert Brass.