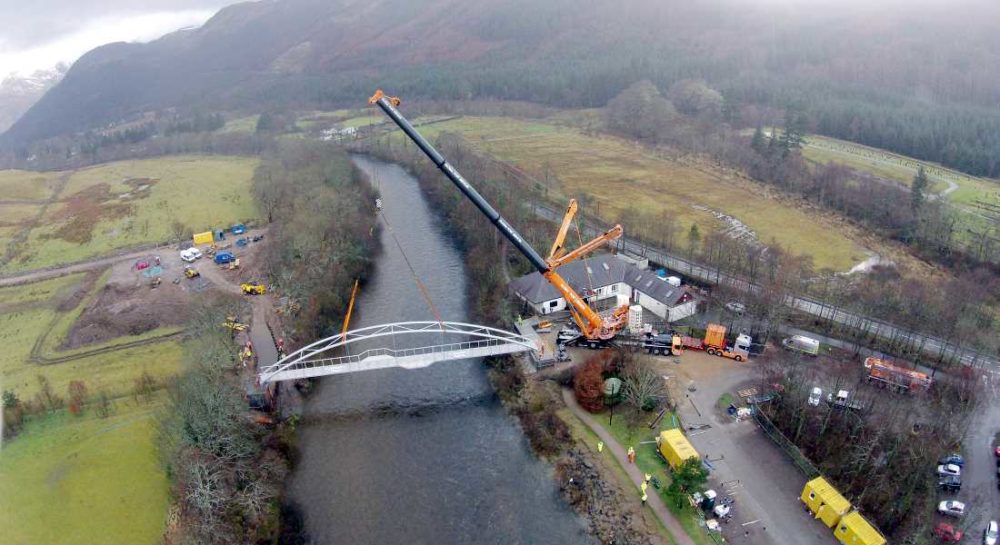 MORAY BASED ENGINEERS are behind a new bridge project in the Highlands that will provide access to walkers – including those with restricted mobility.

The new 139-foot pedestrian bridge provides access over the River Nevis to nearby Ben Nevis, and has been constructed and installed by Forres firm AJ Engineering.

So large is the bridge that it had to be driven down to Fort William from the Forres depot in several sections and then bolted together on site.

Gary Moir, AJ Engineering’s project manager for the bridge said: “We were contracted by Fion Construction of Fort William to manufacture and install the 139ft long bridge. The whole thing was manufactured in Forres and transported to the site at the Glen Nevis Visitor Centre.

“It was an amazing project to work. The big steel arches involved some precision movement to ensure they were formed correctly. It was also a challenge to transport it. It had to be done in sections but even then, some of the pieces were 25 metres long. The road to Fort William is not easy so we had police escorts as well.

“However, everything on the project has gone really well. It is the first bridge that I have had full control over and I am really pleased with how it went. Global Port Services provided us with the 42 metre, 750 tonne crane that was needed to put the bridge in to place and everything went to plan on the day.”

Gary explained this made the Ben Nevis bridge project much easier to work on: “The River Nevis bridge is a community project for Fort William to give both locals and tourists easier access to the mountain.

“To be able to involve our team at NEWCo who came on site meant that for us, there was even more of a community aspect.”