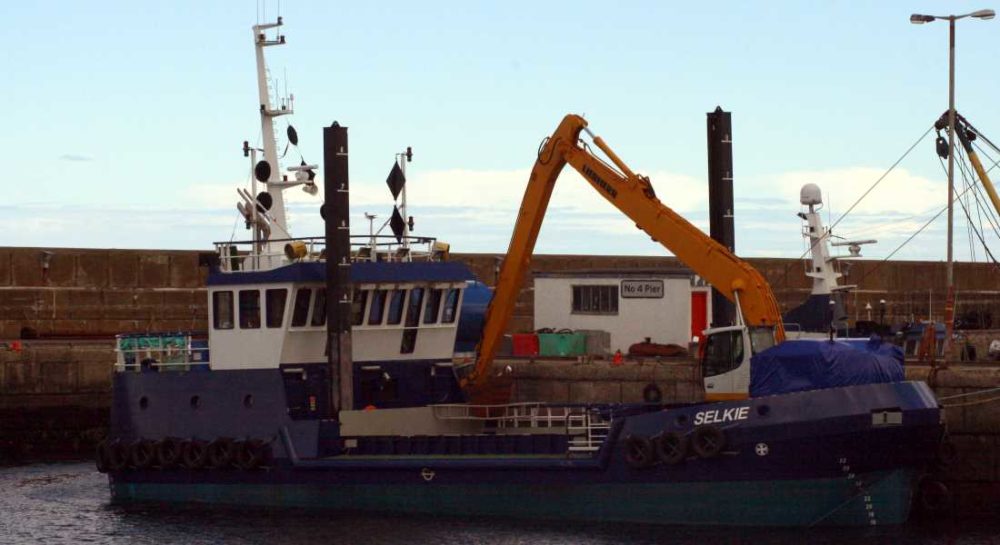 MORAY COUNCIL ARE planning a new approach to crewing for Scotland’s only council-owned harbour dredger just a year after launch.

The MV Selkie cost the local authority £2.4million but was hailed as vital if Moray’s council-owned harbours were to remain operational.

However, the dredger was tied up at its Buckie harbour base for months last year after one of its three-man crew was first off sick and then resigned – exposing a major flaw in the local authority strategy as the Selkie could not work a man down.

In a report being put before members of the audit and scrutiny committee this week, officials paint a largely successful picture of the first full year of operations for the vessel, saying that it had managed to remove just short of 13,000tonnes of material from council-owned harbours.

It warned, however, that while trial dredging of the four leisure harbours had proven successful, with planned removal of 6000tonnes, that took the authority to the limit of what it could remove from such harbours – so under their licence terms no further dredging in these harbours could take place until October this year.

Acknowledging the staffing difficulties from August to December for the vessel, the report suggested that a new approach was being planned to deal with similar issues in future, saying: “The dredger’s deckhand resigned in August 2016, reducing the available crew to two, which meant that the dredger was not able to operate until a new deckhand had been recruited.

“[This had to be] without using expensive agency staff, which was not felt appropriate as there was sufficient scope in the year one programme to fulfil the council’s internal dredging requirement within the financial year.

“This did however highlight a resilience issue that needs addressing for the future. This ship’s master has been scoping out a ‘stand by’ role which could be fulfilled by existing harbour staff. This will require training, and a competence assessment, the scope and content of which is currently being planned.

“This will provide a level of resilience for basic operations and avoid unnecessary additional staffing costs in a variety of circumstances. Resilience plans for more detailed operations (including ship’s master) need further consideration.

“It should be noted that there is no business case to employ additional crew members beyond the current three permanent crew members.”