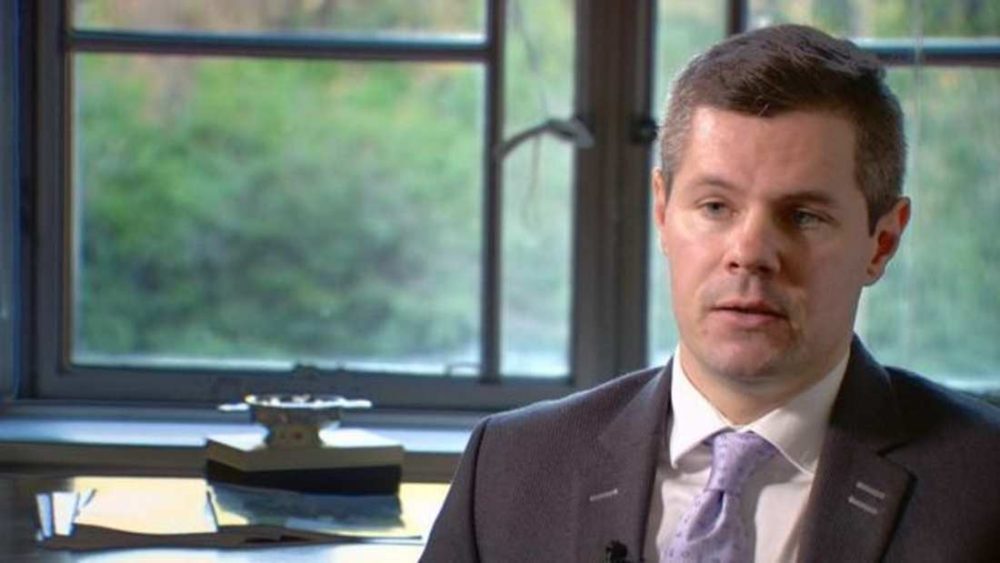 In the second part of our review of the Moray Council budget passed yesterday, the Editor reports on the heated exchanges over business rates revaluation. Part One can be found here.

THE WAY OF POLITICIANS when faced with the job of dealing with bad news these days more than ever before appears to be the offering of a sugar-coated suicide pill.

That, at least, is how it seemed to the Independent-led Administration group in the Council Chamber as, before the main event, Councillor John Cowe sought for unity in the chamber in calling on the Scottish Government to show some mercy to the many hard-pressed local firms facing catastrophic increases in their rates.

Councillor Cowe, who has no mean record himself in running a business long before he, perhaps rashly, decided to scupper my own attempts at becoming a councillor, gave an impassioned plea that sadly failed to penetrate the 22 deaf ears belonging to the SNP group.

Throughout they remained firmly holding the Party line – and putting up an alternative that rather than moaning, Moray Council should put in place immediately its own transitional rate relief scheme.

This at a time when the local authority was just about to announce millions of pounds in forced savings – including a devastating £7.6million dip into the reserve pot.

Councillor Cowe opened the debate with a motion that was full of passion and not short of highly convincing and very stark facts. Calling on a plea for action from Finance Secretary Derek Mackay, he said he had been “inundated” by messages from businesses who are on their knees as a result of the review.

The SNP response was a swift kick to any hopes of a united front, their perhaps soon to be leader, Councillor Graham Leadbitter, strictly defending the national party line that it was a matter for the Council to deal with – neatly side-stepping the financial realities and holding up neighbouring authorities as models of common sense because they were looking at funding their own rate relief package for the hard-pressed businesses.

In the event the SNP amendment that rather than writing another ‘useless plea’ to the Finance Secretary, Moray Council would, at their next meeting, formulate their own rate-relief package, was defeated.

Following the meeting the leader of the Council, Stewart Cree, laid into the SNP group who he said were seeking to distance the Scottish Government from any responsibility for the swingeing non-domestic rates increases.

He said: “The Scottish Government, despite reports to the contrary, receives the money raised in respect of Non-Domestic Rates.

“It is their decision, at the Minister’s discretion, to determine what portion of these funds they see fit to return to local councils as part of the finance settlement. This year the amount returned to the Moray Council has fallen by £3million.

“Despite this, the local SNP group believe that responsibility for addressing the impact on local businesses should lie with the Moray Council, who have received no funding whatsoever to address this.

“To me it is unfathomable that, once again, the local SNP group choose to close ranks with their Holyrood masters, do what they are told, and offer no criticism whatsoever in that direction.

“As was said during the debate the answer is simple. Let the Secretary for Finance and the Constitution lower the rate he charges to an extent that will offset the rates increases which have been established by an independent assessor.

Councillor Leadbitter was unmoved by the Independent and Tory attacks, insisting that their position, that Moray should find funding in their budget to relieve the pressure on local businesses, was a far better option.

He said: “What we had today was a non-motion from two Independent Councillors to write a letter – nothing more, nothing less. The SNP instead put forward a concrete positive proposal that a transitional rates relief scheme should be drawn up and reported to the Council before the end of March.

“The Council’s Independent and Tory Administration had the opportunity today to grasp the nettle and support that positive proposition and take real action, using the power that the Council was given last year, and provide financial relief to the small number of businesses that may struggle with their rates revaluation.

“In this round of rates revaluations it is important to remember that more businesses than ever in Moray will not be required to pay any rates. We recognise, however, that there are some sectors like hospitality where some businesses have been hit with larger revaluations than they may have expected and that is why we put forward a proposal to take real action in support of that.

“The bottom line is that every Independent and Tory Councillor at today’s council meeting voted to take no real action and simply to write a petulant letter. This is about taking responsibility and the Independents and Tories have shown no responsibility whatsoever on this issue.”

Having declared at the outset an outside interest in this particular debate, Councillor and regional Tory MSP Douglas Ross said that he would be speaking in a Holyrood debate urging action from the Scottish Government.

Responding to the SNP group line, Councillor Ross was, unsurprisingly perhaps, less than impressed: “The motion to Full Council was an opportunity for all councillors to unite behind our local businesses and urge the Scottish Government to take action before some of these popular venues and businesses are forced to sell-up.

“However, SNP councillors, who are prohibited from speaking out against their party, would not support plans to simply write to the SNP Minister for Finance about this. They have suddenly taken an aversion to writing to Ministers to put across Moray’s case, something they are all too ready to do when they see Westminster as the problem.

“Perhaps more shameful is the way they are manipulating what actually happened at the meeting.

“Knowing they could not support the motion asking their own party to do something, SNP members said they were putting forward a plan. They didn’t. They asked for a report on a potential scheme to come back – but gave no proposals on how it would work or what it would cost.

“As plans go, the back of a fag packet comes to mind and the fact SNP councillors had no detail to go with it shows how uninterested they are in the plight facing our local businesses.

“Businesses want action, not empty gestures like the one from the SNP which was hastily arranged as they couldn’t bear to criticise their own party for the absolute mess the SNP are overseeing with these rate revaluations.

“The Council could have sent a strong, united and unanimous message to the Scottish Government but when local businesses needed local SNP councillors to stand up for them they were severely let down.”