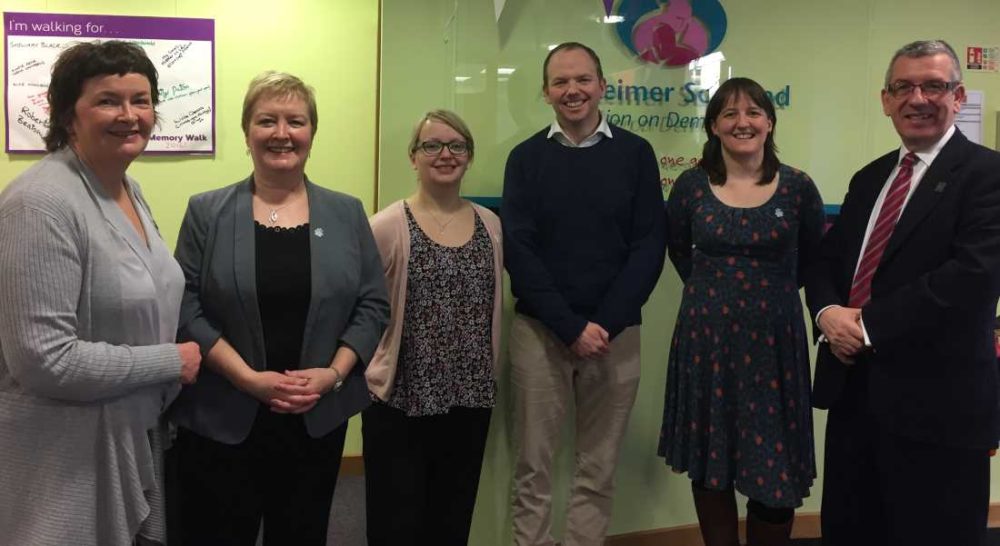 A CROSS PARTY GROUP of parliamentarians have been highlighting the importance of signing up to become ‘Dementia Friends’ this week.

Regional Labour MSPs Rhoda Grant and David Stewart were joined by Tory Donald Cameron and the SNP’s Maree Todd in signing up in Inverness.

The Labour MSPs, who were joined by a staff member from their own office and a staff member of Gail Ross MSP, signed up to become Dementia Friends in a bid to raise awareness of dementia and create dementia friendly communities. The MSPs also met with Walter Grant, who is a member of the Highland Dementia Working Group.

The event was arranged after Rhoda Grant MSP was approached by Geraldine Ditta, Policy and Engagement Manager with Alzheimer Scotland, to help publicise the work Alzheimer Scotland does in trying to help people understand dementia and create dementia friendly communities.

Several more MSPs from throughout the region who were unable to attend the event sent messages of support, including Liam McArthur who has already signed up as a Dementia Friend in his Orkney constituency. There are currently over 31,000 Dementia Friends throughout Scotland.

Geraldine Ditta said “Dementia is the country’s biggest health and social care challenge. With approximately 90,000 people living with dementia in Scotland, with about 8,000 of those living in the Highlands, Islands and Moray, dementia is everyone’s business.

“People living with dementia and carers talk of their social circles diminishing so they are at risk of becoming socially isolated and disconnected from their local communities. Becoming a Dementia Friend is a way for individuals and communities to support those living amongst them, friends, neighbours to live as well as possible with dementia. Sometimes it’s the smallest thing that can make a big difference.”

Rhoda Grant said she was delighted to sign up to the cause – and encourage other MSPs to do the same: “It is great that we have come together on a cross-party basis to raise awareness of dementia which affects so many people in all of our communities.

“Any action, from spreading the word through social media, to committing to spend time with someone affected by dementia, to fundraising for a dementia-related cause will help. I am honoured to support the work of Alzheimer Scotland in making our communities dementia friendly.”

Mr Stewart added: “It was a first-class awareness raising event which has changed my perception towards dementia. I am delighted to now be a Dementia Friend.”