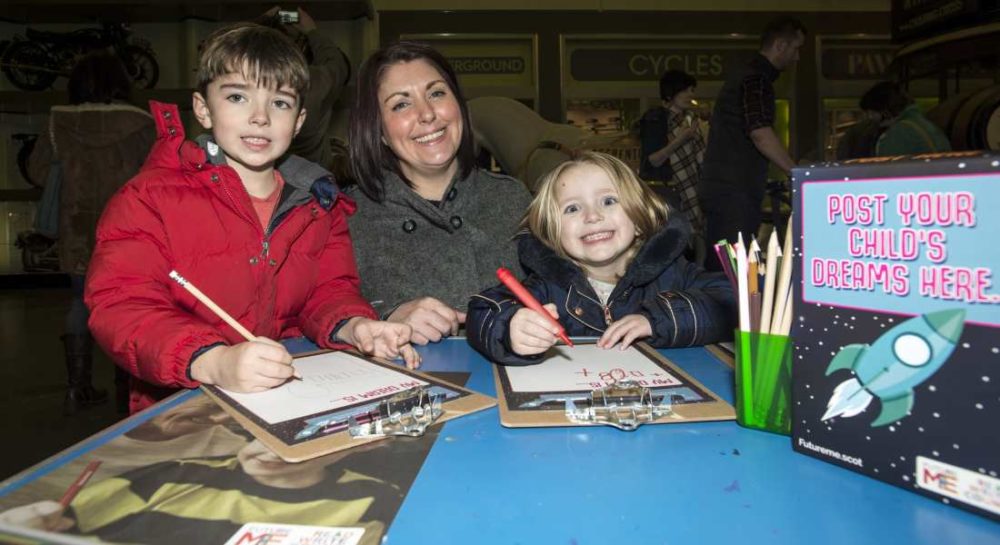 CHILDREN THROUGHOUT SCOTLAND and their parents are today being encouraged to share their dreams for the future in a new Scottish Government initiative.

This morning the ‘Future Me’ campaign was launched, part of the early years initiative ‘Read, Write, Count’.

Future Me aims to support families to start a conversation with their children about their hopes and aspirations, which will ultimately help to improve their lives in the future. It asks families to share those dreams, either as a picture, letter or film on the Future Me wall at www.futureme.scot.

Part of Read, Write, Count, a Scottish Government campaign that aims to improve key numeracy and literacy skills among children in Primaries 1 to 3, it allows parents and carers to play a big part in helping children achieve their dreams.

Supporting the campaign is children’s author Simon Puttock, who dreamed of becoming a writer since the age of seven.

He said:“I love working with children as they have such vivid imaginations, It’s important we encourage children to think and dream about the future and to realise that anything is possible if they put their mind to it. I knew from an early age that I wanted to write and so with the encouragement of my parents to read, I developed a love for books, illustrations and the written word.”

Deputy First Minister and Cabinet Secretary for Education and Skills John Swinney said: “The Future Me campaign is about encouraging parents and carers to talk to their children about their dreams and ambitions for the future so they can start working to make these dreams a reality together.

“This will not only help to raise aspirations, increase attainment and deliver better outcomes it will also provide families with ideas they can do together to build essential lifelong skills which will benefit their children whatever they decide to do.

“I look forward to seeing the dreams of our young people throughout the country shared on the Future Me wall.”

To become involved in the campaign entries online or families can head to their local library in Moray where they can post an entry form in the Future Me post box. Each family taking part will receive a certificate and a place on the digital wall for their child.

The Future Me website also provides parents and carers with tips and advice about fun and interesting ways to encourage your child to realise their dreams.

The campaign builds on existing Scottish Government efforts to tackle educational inequalities and raise attainment in early years and beyond.