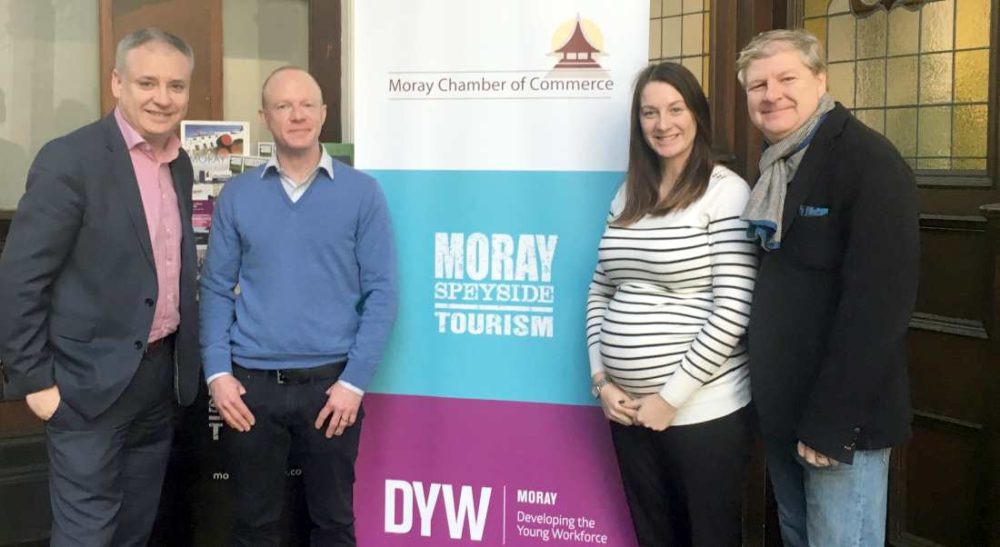 PRAISE WAS BEING heaped on the efforts in Moray to boost tourism to the region with a briefing held this week for Angus Robertson MP and Richard Lochhead MSP.

The pair met with Moray Chamber of Commerce CEO Sarah Medcraf and Moray Speyside Tourism Operations Manager Laurie Piper to look over priorities for the sector this year.

Visitor numbers to Moray have risen above 700,000 according to the most recent figures – of which 430,000 remained in Moray for more than three nights. Visitor spending in Moray is now estimated at £105million and supports 2500 full time equivalent jobs.

Mr Robertson and Mr Lochhead discussed how they could best support the efforts of the two local organisations in the future, with the MP saying: “Moray’s tourism offer continues to go from strength to strength with visitor numbers, visitor spend and overnight stays all increasing.

“There is a huge amount that our region has to offer and with massive investment in the whisky sector, such as Macallan’s £100million investment, there is undoubtedly greater than ever potential for growth.

“Looking ahead we are looking to meet with businesses and others involved in tourism in Moray and providing support for the sector. That support can be continued work with the whisky sector which is a key driver for attracting visitors or by helping individual businesses with specific issues and concerns.”

Mr Lochhead added: “The efforts being made to grow our tourism sector in Moray are really significant, from the work of Moray Speyside Tourism and the Chamber of Commerce to the efforts of many volunteers who are making events such as Piping at Forres, the Speyside Whisky Festival and Elgin’s Food & Drink Festival the fantastic successes that they are.

“In addition we have many other initiatives such as the Moray Coast Tourism Group, Elgin’s Castle to Cathedral to Cashmere project and many local music and summer festivals that are drawing in visitors from near and far.

“Growing our tourist economy is a constant job of work and one that we are committed to supporting.”

The opportunity to discuss plans for 2017 was welcomed by Mr Piper, who said: “I was very glad to have the opportunity to share some of the region’s tourism success stories with our elected representatives.

“It’s good to know that Moray Speyside has such strong advocates at both Holyrood and Westminster, and I look forward to working with them to ensure that Moray Speyside is duly recognised as a world-class visitor destination, providing a unique and authentic experience for visitors from around the world.”