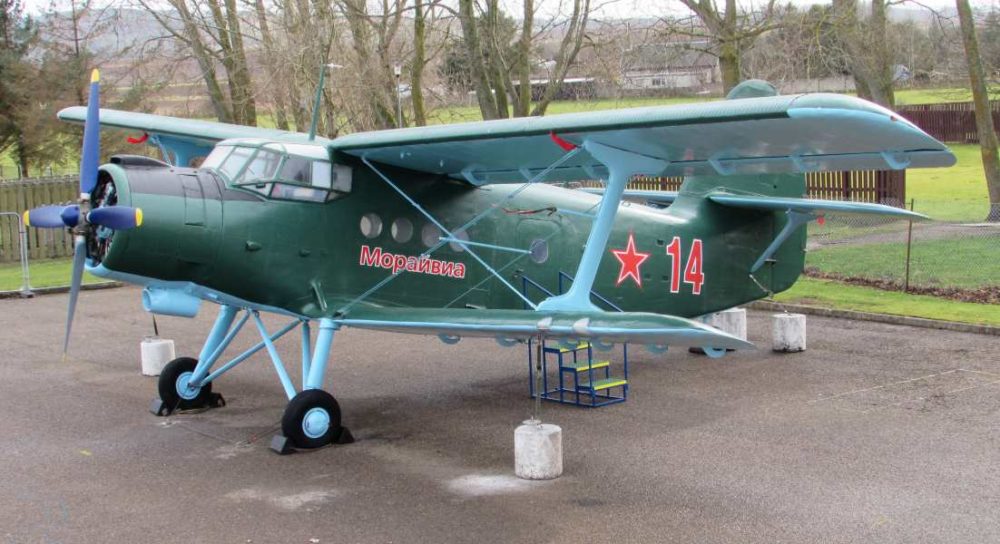 TWO WEEKS AHEAD of their opening the doors once again on one of the most compelling attractions in Moray, Science and Aircraft attraction Morayvia has unveiled their latest ‘star’ attraction.

Weeks of hard work have been completed on the Antonov 2 biplane – for many years the workhorse of the Soviet Air Force – and now sporting new decal it is ready for public scruitiny.

Purchased from and delivered by Steve Hobday in June last year, the Antonov’s journey from Brittany, where the fuselage was located, and its subsequent reassembly and transformation by Morayvia’s volunteers have been nothing short of remarkable.

Morayvia’s Stan Barber said the decision to invest their limited funds on this project was a bit of a no-brainer, as the Antonov is the largest single-engine biplane in the world today.

“The aircraft was built to operate in a number of roles from rough fields and over 20,000 were built, many in Poland including our own example. However, it did serve with the Russian state-owned airline Aeroflot, as of all things a crop-duster, though it was later sold on and served in the UK as a civilian operated parachute training aircraft.

“The Russian Air Force also used the type as a para trainer, hence the decision to display it in this guise. The number on the side 14 refers to its original designation when delivered to Aeroflot of CCCP 07714, whilst the Cyrillic lettering will no doubt create much discussion.

“Ed Lamont of Ed’s Custom Signs Buckie provided the stars and markings which have transformed the look completely.”

Several Moray businesses joined Ed’s Custom Signs in helping make the transformation possible – from the Murray family who provided a crane to offload and partial reassembly, to Billy Miller who provided a vital telehandler for the aircraft’s reassembly.

Jim Simpson, Morayvia’s engineering member, said it was the volunteers that have been key in the Antonov’s transformation.

Morayvia Chairman Mark Mair said he was once again humbled by the work undertaken by volunteers. He said: “The Antonov is just one of the projects the volunteers have been working on since we closed last season.

“We have also been progressing the repair, rebuild and respray of a Hunter F5 cockpit and Jet Provost T4 as well as similar upgrades to the Canberra, which is due to appear at XV(R) Squadron’s drawdown celebrations as it operated the type when it was the world’s first jet bomber.

“Our Nimrod section has also undergone refurbishment with the cracked cockpit window now replaced. These activities as well as adding significant value to Morayvia’s assets, are providing quality heritage items that make Morayvia a unique visitor centre and an asset to Moray and Scotland, all delivered by volunteers.”

Stan Barber added that the Antonov provides a unique Scottish link with Russia that has roots in the heroic wartime Arctic convoys, recorded and being developed by the Russian Arctic Convoy Memorial Project in Highlands, where a new exhibition centre is due to open on May 1 at Aultbea.

Morayvia reopens its doors at weekends from Saturday April 1 at 11am. During the local school holidays, Morayvia will also be open on April 6 and April 13 before reverting to weekends only.