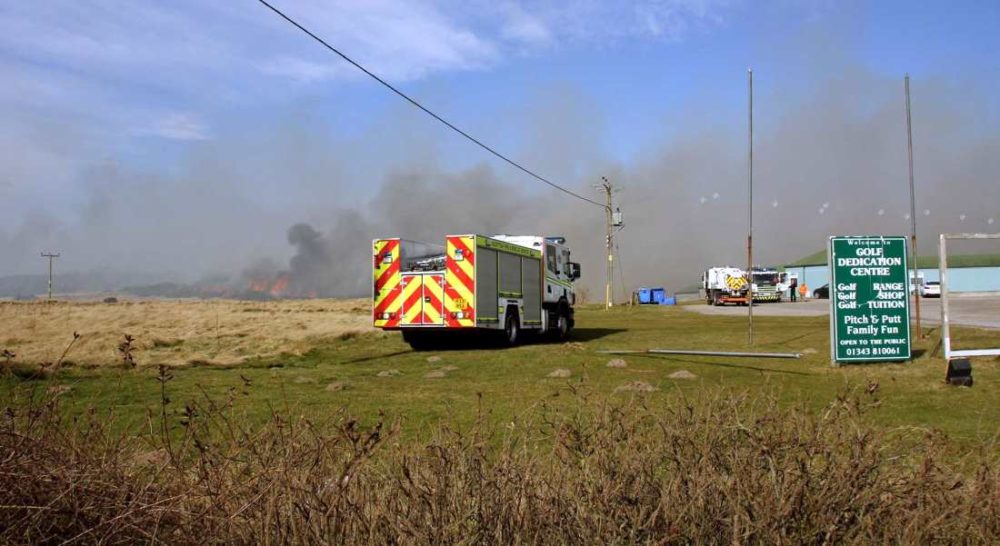 THE MORAY CAFÉ that appeared just moments away from disaster as a raging gorse fire came within feet of its walls has paid tribute to the emergency services.

Aroma owners Gayle Johnstone and Amanda Adams put everything they had into their enterprise when they opened the Café at Covesea, in the shadow of the famous lighthouse, just over 18 months ago.

Yesterday they could only look on in growing despair as flames leaping up to 100feet into the air threatened to engulf their premises.

Staff and customers were quickly evacuated from both the Café and nearby Silver Sands holiday park as fire crews and police units rushed to the scene from throughout Moray and beyond.

The drama began to unfold at around 9.30am when the first reports of a small gorse fire being spotted – an hour later things got a lot more serious, and by shortly after 11am police ordered the evacuation and closed the road between Lossiemouth and Hopeman. Fire and Rescue service crews, brought in from as far as Inverness, fought to halt the flames as they threatened the Café, coming just feet from the premises.

Gayle said: “We saw the flames spreading and called for help at around 11.30am – but within minutes the fire started coming around the back of the building. The windows in the kitchen were hot to touch and we have our oil and gas canisters out there, so that was really worrying.

“The smoke was so hot that you could not stand outside the café – and the wind was pushing the flames towards us.”

At the nearby holiday park a total of 78 guests and staff had to be evacuated as the flames came within feet of the vulnerable caravans. They were all taken to the Lossiemouth High School where they remained for two hours until the all-clear was given.

A spokesman for the Fire and Rescue Service confirmed that the blaze was brought under control later in the afternoon, with crews remaining in place last night to control any further outbreaks.

First on the scene were crews from the Elgin Fire Station and nearby Gordonstoun’s volunteer crew. Gordon Morrison, the station manager at Elgin, said that around a mile wide area of whins and grass had caught fire and were further fanned by strong winds.

“We required 11 pumps from throughout Moray and Inverness with 48 firefighters – but the fire was under control by 2pm,” he said, adding: “I was extremely grateful for the assistance from our fire service colleagues at RAF Lossiemouth who also sent an appliance.”

Fire crews later thanked the owners and staff at Aroma who before and after their evacuation provided much-needed refreshments.