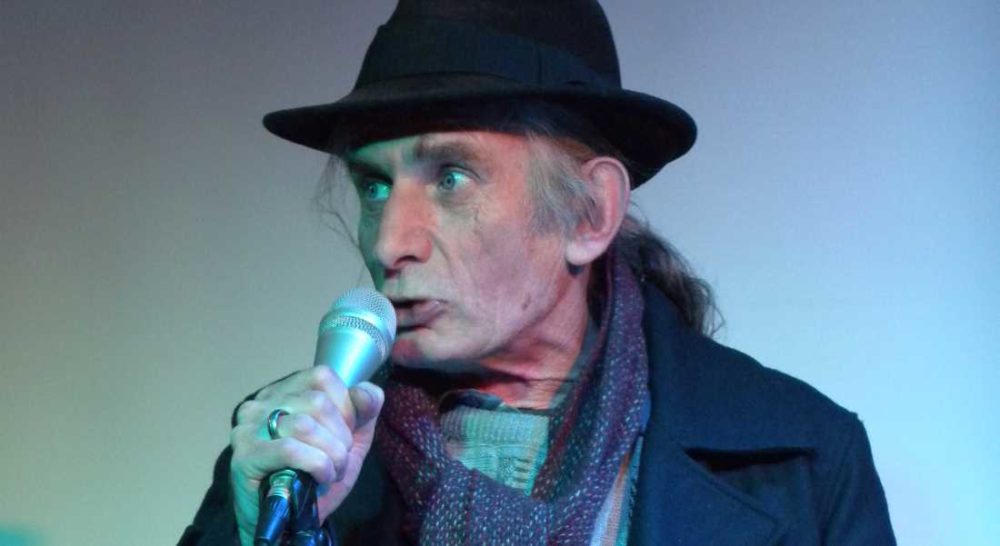 AN EVENT CELEBRATING the life and work of poet John Mackie is to be held at the Beach Bar in Lossiemouth next month.

The venue is one that John himself often used to entertain friends – now the team behind the film Lossiemouth – Land, Sea & Sky, deeply saddened by his death at the age of 70 just before Christmas, have been working on personal tributes to him to be shared at the event.

Artistic Director and Documentary film producer Yvonne M Findlay of Creative Visions Moray is behind the evening, an opportunity for those who knew John and loved and appreciated his work to come together and share, reminisce and celebrate his life.

Writing for insideMoray, Yvonne said: “I hope the evening will be relaxed and informal.

“John contacted me early in 2016 and said he would be delighted to work with me on the film. He would journey from his home in Banff to attend sessions. Even if he was not recording with me for the music and poetry sections he would come to encourage and support the team.

“He had a great interest in people and the history of Lossiemouth and a tremendous respect for the fishing community and boat building of Lossie history.

“A love of Lossie was something John and I shared at a profound level. He once commented ‘as well as the sea and roar of aero engines – I have known and loved Lossie since a tiny boy living eight miles along the coast.’

“I feel John understood what I was trying to achieve in my film productions and came to offer me his gift of poetry and support. He travelled far and wide to collaborate with friends and participate in creative groups and was busy, sociable and creatively productive right up to the end. He enjoyed encouraging and fostering others to develop their potential and talent. “John would sometimes seem a little tired and breathless at some sessions but he would shrug off my concerns assuring me he would rest up when he got back to Banff and be fine. His work on the film ‘Lossiemouth – Land Sea and Sky’ will be among his last works and recordings in a career which began writing poetry and lyrics in the 1970’s.

“He was a member of the band Djinn, formed by Tony Visconti, along with David Bowie. David Bowie was to record one of his lyrics. Throughout his time in London in the 1970’s John appeared with Joe Cocker, Marc Bolan, Pink Floyd and Marsha Hunt.

“We had some happy creative sessions for the film throughout 2016 at the ‘Creative Hub’ at St James Church Hall Lossie. His beautiful poem ‘Lossiemouth Dawn’ set to music by Trevski and Ray Chaston is a reworking of an earlier work Speyside Dawn.

“I was so happy that despite his deteriorating health he was able to attend the premiere of Lossiemouth – Land Sea & Sky at Lossie Town Hall in November 2016. He was very pleased with it and enjoyed being with his friends and the team that night.

“I feel privileged to have worked with him and we were delighted the film was completed in time for 2017 year of ‘History, Heritage, Archaeology and Culture.’ The story of Lossiemouth is explored from prehistory to the present day and narrated by medieval historian Dr J.R. Barrett, Dr Gordon Noble of Aberdeen Department of Archaeology and Lossie’s own legendary local historian Donnie Stewart.

“The film is the result of an intergenerational project I began in 2015 and the sequel to Lossiemouth Northern Lights. Both films feature original music and restored archive cine film and photographs

“John’s last message to me in December just before he died read: ‘It was a joy to collaborate, nudge, suggest, learn and grow – I am home.’ I replied ‘I am glad you feel at home with us.’

“I was to hear on Christmas Day that he had died. This last exchange between us was comforting. I feel it was such an honour to have worked with him and I will continue to carry his words of encouragement and support in my work. I miss him.”

Anyone wishing to attend the tribute event on April 14 is asked to contact Yvonne by Email to yvonne@creativevisionsmoray.co.uk

Meanwhile, DVD copies of Lossiemouth – Land Sea & Sky are available from Miele’s and Harbour Treasures in Lossiemouth or Sound & Vision in Elgin.