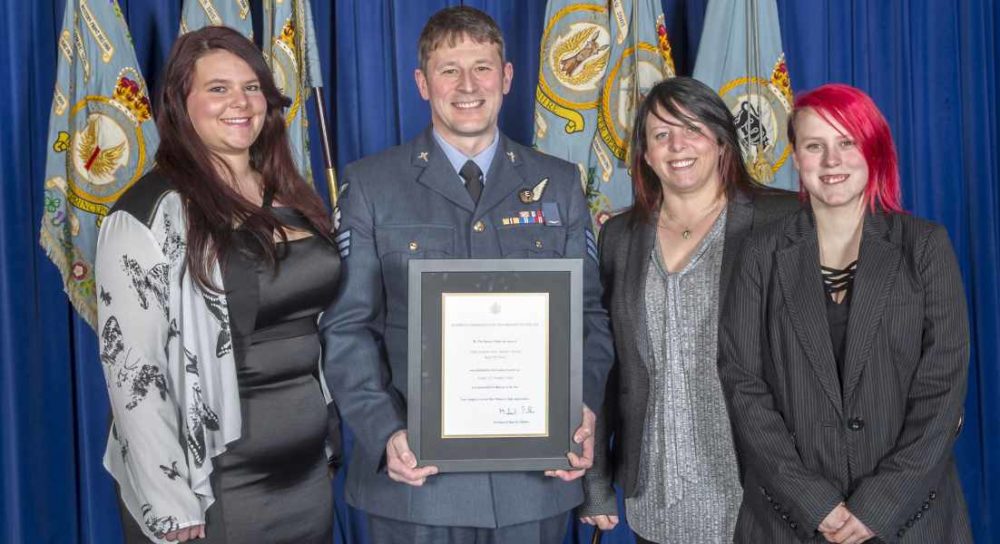 A FORMER RAF Search and Rescue crewman returned to his former base at Lossiemouth this week to receive the Queens Commendation for Bravery in the air.

Sergeant Sean Proctor, who is now in the RAF Reserve, was recognised for his actions in recovering a fisherman from his vessel during severe weather conditions.

The Queen’s Commendation for Bravery in the Air is awarded “for an act (or acts) of bravery while flying not in the presence of the enemy”.

The rescue for which Sgt Proctor has received recognition took place in February 2015, 95 miles north east of Aberdeen. His Lossiemouth-based Sea King was requested to airlift a crewman suffering from severe abdominal pain from his fishing vessel.

However, the very severe weather conditions included winds of 45knots, low cloud and rain and visibility down to 200 metres at times. That with a fierce sea made it a challenging rescue even for the experienced SAR crew.

A hi-line was initially lowered to the fishing boat to guide Sgt Proctor, the helicopter’s winch man, to the deck of the vessel. The swell of the sea caused the boat’s crew to pull too hard on the hi-line with Sgt Proctor’s descent being made more perilous. Nevertheless through sheer strength and determination he was able to grasp the hi-line and pull himself on to the vessel.

Swiftly assessing the condition of the casualty, he prepared him for winching and grasped the winch hook as the vessel lurched violently. Recognising the danger of the situation, Sgt Proctor rapidly attached himself and the casualty to the winch hook for recovery to the helicopter.

Sean now lives in Forres with his wife Elizabeth and daughters Shannon and Caitlyn. Following the presentation he said: “I’m honoured to have received this award, but I think it’s recognition of the work, effort and skill of the whole crew who responded to the call out on that night.

“We really worked together to safely recover the injured fisherman from his vessel. The weather did make it challenging for the crew, but our training prepared us for the toughest of situations, and we were able to draw on that training, as well as our experience, to successfully complete the task.”

Sean is now working with the Bristow Group in Inverness with the civilian SAR service which took over duties from the RAF. However, keen to maintain his connection with the RAF Sean also joined the RAF Reserves, and is now a paramedic with 612 Squadron based at Leuchars Air Field.

Sgt Proctor was presented with his QCBA award by Group Captain Paul Godfrey during an event held in the Offers’ Mess at RAF Lossiemouth. Several other awards were presented to Station personnel during the event; these included Long Service and Good Conduct medals, RAF Commendations and Colours, and a Royal Warrant.