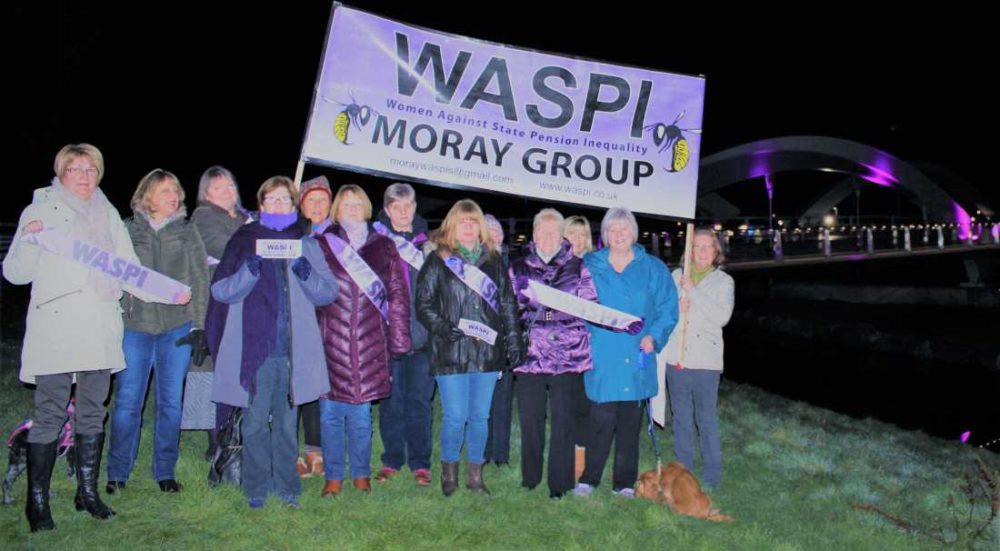 AT THE HEART of a mass demonstration taking place in London next week will be a delegation of women from Moray who stand together with thousands battling unjust pension changes.

The London demonstration on March 8 coincides with Budget Day and International Women’s Day – making it the ideal time to let the UK Government know the feelings of Women Against State Pension Inequality (WASPI).

Sheila Forbes is the Moray co-ordinator for WASPI, the campaign fighting for recognition of the unjust manner in which changes were made to the age of retirement for women from 60 to 65 – or, in many cases, 66.

Sheila said: ‘Of course we support bringing about equality in pensions between men and women – but the problem is that the government did not inform women when they made the change in 1995.

“Again, many women weren’t informed of this change either. We are still meeting women in Moray who genuinely believe they will get their pension at 60. The lack of notice has caused real problems, not allowing women time to plan for their later retirement and pushing many into financial hardship.”

WASPI’s protests included the recent Purple lighting on the Landshut Bridge in Elgin, part of the national campaign where prominent buildings were lit up to focus on the campaign. The Moray women will set off on their 1200-mile round trip early on March 8, joining protesters outside the Westminster Parliament where they are expecting to receive support from local MP Angus Robertson and other SNP members who have supported their campaign.

A national spokesman for WASPI said the aim of the event is to ‘Bring the pensions plight of 1950s women to the attention of the government.

She said: “We have worked hard all our lives, many of us from the age of 15, saved and supported ourselves. Now we find that after a lifetime of doing the right thing, through a lack of notice of the pension age changes, the government is taking away our security in retirement.

“Many of our women have lost as much as £48,000 of pension income and had as little as eighteen months’ notice of a six year increase to their State Pension Age. It’s no wonder that they are calling on the government to make fair transitional arrangements to their new pension age.

“WASPI does not object to the increase in the women’s SPA, but simply the unfair and discriminatory way the changes were carried through.”

The Moray WASPI Supporters Group calls upon local women to come to the demonstration in Westminster on March 8 and to join the local group.

The group can be contacted by Email to moraywaspis@gmail.com or for more information visit the WASPI website.