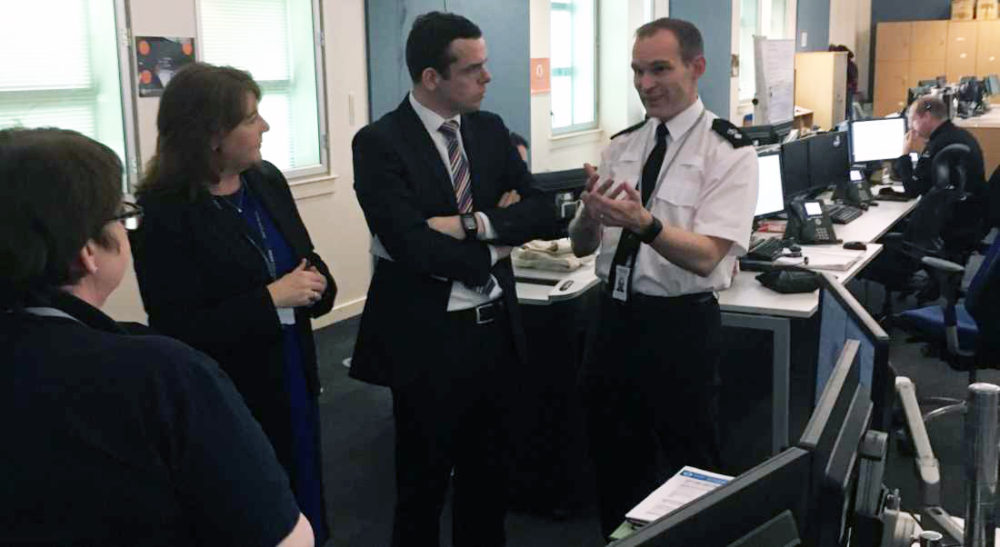 CONCERNS ARE STILL being expressed by many following Police Scotland’s moving their command and control function from Aberdeen to Dundee.

However, regional MSP Douglas Ross has praised the staff concerned in the move for their “clear dedication and commitment”.

The Moray-based MSP recently paid a visit to the central control room at Bilston Glen on behalf of the Scottish Parliament’s Justice Committee, meeting with officers and staff in the process of preparing and handling calls – including those from Moray – that were previously routed via Aberdeen.

Mr Ross said: “While I still have concerns about this function being centralised I do recognise the preparations which have taken place to take on the calls from Aberdeen. It is clear the dedication and commitment of staff at the former call centre in Aberdeen will be replicated in this new control room.”

The call handling structure being implemented nationally is based upon the establishment of the Police Scotland Service Centre where every 999 and 101 call made to Police Scotland is answered and assessed, and an Area Control Room structure, where any call requiring a Police response is managed and controlled.

The new structure has resulted in a reduction in the number of sites operated across the country, with transfer of business from Aberdeen service centres to the Police Scotland centre, and the control room in Aberdeen to the North Area Control Room in Dundee.

Mr Ross has sought assurances from Divisional Commander Campbell Thomson, chief superintendent for the North East Division, who said that a programming team has been tasked with coordinating the necessary activity.

Mr Ross added: “I hope to see continued delivery of excellent local policing services to communities throughout Moray who are served by this centre.

“I have again raised concerns about locations of potential emergencies not being known to staff in a more centralised centre and while I have been offered some reassurances, this is still an area of concern.”