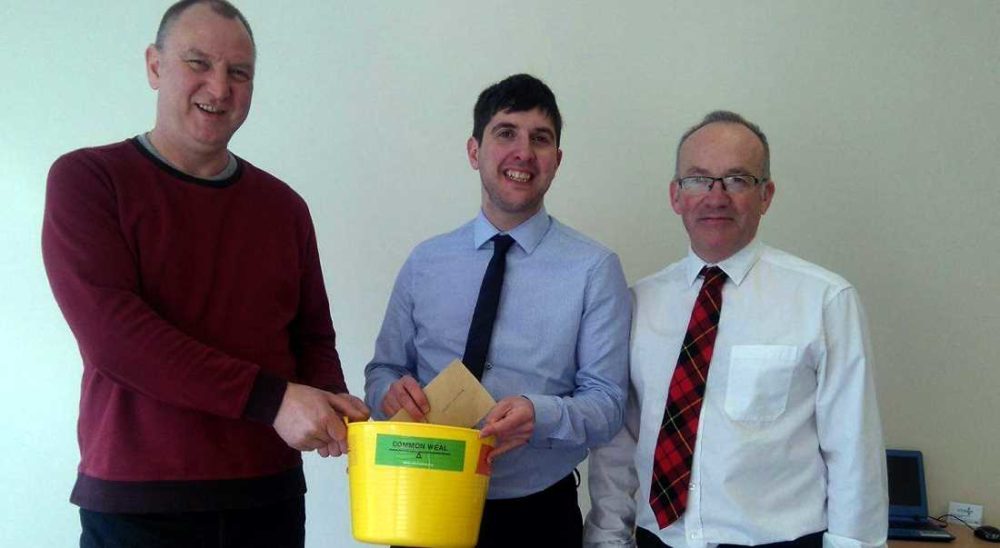 THE MORAY FOODBANK has received a £400 boost thanks to recent screenings of the movie ‘I, Daniel Blake’ by Common Weal Moray earlier this month.

Almost 100 people turned out to view the highly acclaimed film produced by Ken Loach that follows the fortunes of a man refused employment and support allowance.

Douglas Reid, a Common Weal Moray organiser, said: “This was something that we were very passionate about and we were delighted that it has been a great success.

“Whilst the content of the film is pretty difficult to watch at times it is a real eye opener to the sheer madness of the processes involved in the welfare system at present.

“Those who attended left both angry and determined in equal measure. Angry at how we have managed to get to where we are and determined to see a real change that gives dignity and respect to those receiving benefits.”

The group was also supported by the local branch of the Educational Institute for Scotland (EIS) who not only donated directly to the Food but also provided the costs of the venue hire for both nights meaning that more of the cash raised via donations could go straight to the Foodbank.

Barry Jarvis, Common Weal Organiser and Chair of the Moray Trades Council said: “It was great to see a number of committed Trade Union activists attend on both nights and our thanks go out to EIS in particular their very generous donation ensured that the maximum amount of money went to the Foodbank.

“Now more than ever it is vital to show solidarity with those who through no fault of their own find themselves relying on support from the state to feed themselves. Our thanks to EIS for the support in making this happen.”

Common Weal Moray also expressed their thanks for the campaign for a different kind of Scotland and how to achieve it. Their organising group in Moray works to bring speakers from across Scotland and locally to put forward ideas about how to achieve a Scotland of social and economic equality.

Since the start of 2016 they have brought names such as Gordon Macintyre-Kemp, Peter A Bell, and Robin McAlpine to speak in Moray.

(Picture above of Barry Jarvis and Douglas Reid handing over the donation to a member of staff at the Moray Foodbank Office, High Street in Elgin.)