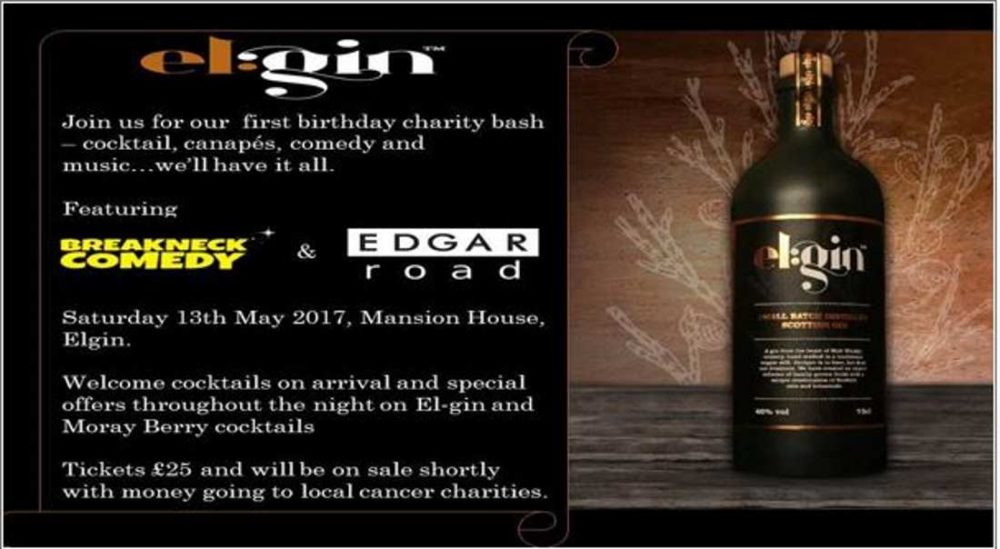 A MORAY GIN DISTILLERY is to hold a special celebration marking a year since it first put its unique craft Gin into production.

El-Gin was founded in May last year – now it is invited supporters to a first birthday celebration at the Mansion House Hotel in Elgin on May 13.

El-Gin initially launched their first Gin in May 2016 and have since released Moray Berry, both distilled in Elgin using local ingredients to produce their Gins.

A spokeswoman for the distiller said: “Over the past year the company has been focussing on expanding their business locally with great accomplishment.

“We wanted to celebrate the El-Gin achievements with the local public who have helped to make this first year a success.

“The event will be held at the Mansion House on the 13th of May where doors will open at 7pm for an evening of cocktails, comedy and live music.”

“Tickets for the event cost £25 per person which will include a cocktail on arrival, canapés, comedians from Breakneck Comedy and live music from the Edgar Road Band. All proceeds for the event will be passed on to go to local cancer charity CLAN.”

Ticket enquiries can be made online at https://billetto.co.uk/e/el-gin-first-birthday-celebration-tickets-190041 or by Email to info@elgin-gin.co.uk.