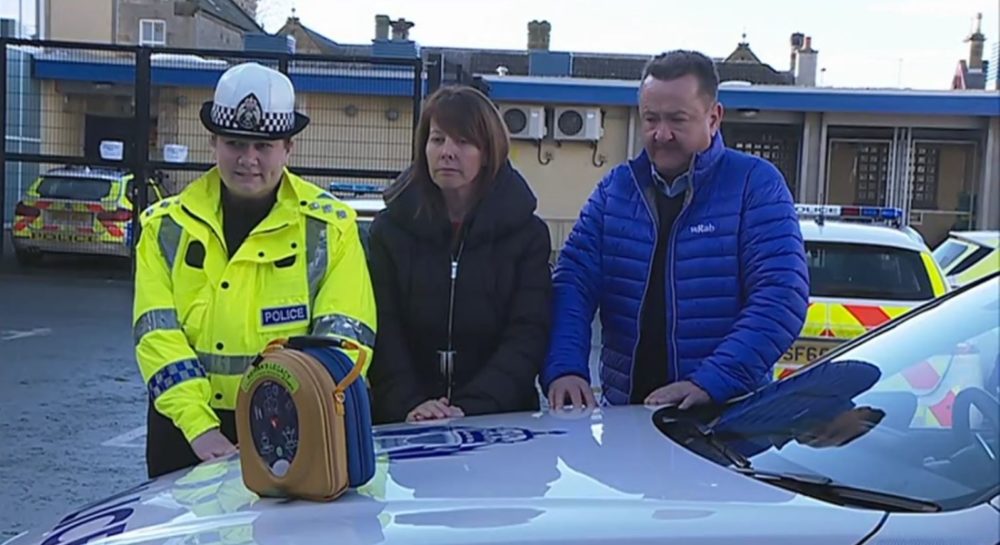 A DONATED DEFIBRILLATOR being used by police and donated by a Moray couple whose son was killed in an accident has helped save the life of a 52-year-old man.

Sandra and Gordon McKandie joined with friends in highlighting how the life-saving machines should be carried by trained police officers.

Their resulting campaign and fundraising effort saw several deployed late last year – now police have confirmed that one of the machines has proven to be a real life saver.

After being called to a layby near St Fergus in response to reports that a man had been found slumped in the back of his car, the defibrillator was used by police first on the scene. The call came on April 1 – exactly one year after Keiran’s family laid him to rest..

After the defibrillator was used to deliver a shock that resulted in a spontaneous return of circulation to the casualty, the gentleman was transferred to hospital in Aberdeen and has since been allowed home where he is recovering.

The heartsine defibrillator used was one of ten defibrillators donated by Sandra and Gordon following the accident that claimed the life of their only son Keiran, aged 16.

Mr and Mrs McKandie supported by their family and friends have fundraised tirelessly in order to fund the purchase of defibrillators which were installed in police emergency response vehicles across the North East Police Division on the 1 February 2017.

The defibrillators have been distributed between Elgin, Inverurie, Mintlaw, Stonehaven and Aberdeen and will be deployed in cases of out of hospital cardiac arrests in road policing vehicles in support of Ambulance Service colleagues.

The daughter of the man whose life was saved, who wishes to remain anonymous, said: “The McKandie family has been incredibly brave and should be proud of themselves for starting a charity which has saved my dad’s life. Thanks to them we will be able to enjoy more time together as a family.”

Sandra McKandie said: “As a result of these defibrillators being available in emergency response vehicles, a gentleman’s life has been saved, which has allowed a family not to experience the heartbreak, sorrow and suffering that we endure on a daily basis.

“This is due to one person alone and that is Keiran. If Keiran did not experience such a cruel and unjustified accident these defibrillators would not be available for Police to use in these emergency situations.

“We genuinely wish the gentleman involved a safe and speedy recovery and hope that he continues to fulfil his life. We will continue to fundraise and raise awareness in Keiran’s name to ensure that all emergency response vehicles are equipped with this life saving equipment, and continue Keiran’s Legacy.

Deputy Chief Constable, Rose Fitzpatrick, Out of Hospital Cardiac Arrest Strategic Lead, said: “It is extremely pleasing to hear that one of the defibrillators donated by Gordon and Sandra McKandie has been used to help save this man’s life.

“I hope that they can take some comfort from knowing that their very kind and generous donation has undoubtedly played a significant part in the man’s chances of survival and I hope he will recover well.

“It is remarkable to think that within two months of the AEDs being installed in road policing vehicles across the North East that we are already seeing such a positive impact.

“Police Scotland will continue to increase the number of officers hi trained to provide advanced AED training in support of our emergency services colleagues across the Grampian region to enhance out-of-hospital cardiac arrest care provision.”