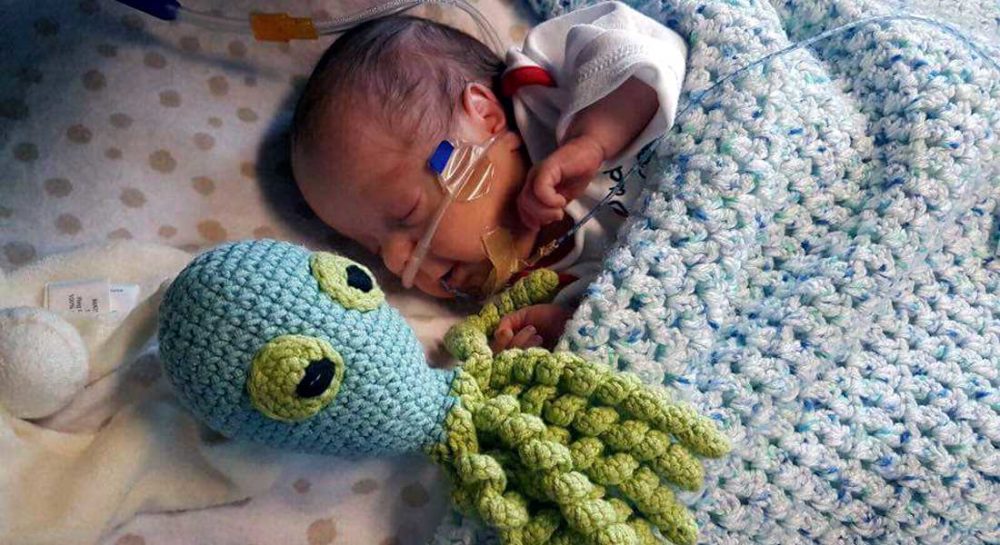 A BRIGHTLY COLOURED hand-made Danish Octopus has been at the heart of a drive by one of Moray’s best-known fundraisers to celebrate her 50th birthday by raising £3000.

In the classic ‘friend of a friend’ exchange, Karen Cox, who leads the local team raising record amounts for the RAF Benevolent Fund in Moray, learned of a three-months premature baby at the Aberdeen Royal Infirmary.

Karen was told by a close friend about the little one, and wanted to do something to help – so having taught herself to Crochet she created the Octopus so that her friend could give it to the baby as a small gift.

“I had seen an appeal from Poole hospital a couple of weeks before,” Karen said, adding: “My friend checked with the ARI and they said why not – so I made two!

“Now the ARI has launched an appeal for more Octos, the first hospital in Scotland to do that – they were first designed in Denmark and soon spread throughout parts of the UK, and they are now firmly established in Scotland.”

Karen, who suffers from Ehlers Danlos Syndrome, fibromyalgia and arthritis, has found that learning to crochet has helped with the 24/7 pain she suffers as well as the mobility in her hands. She added: “It keeps me occupied when I’m stuck at home!”

As chair of RAFBF Lossiemouth, Karen also keeps very busy organising a series of events throughout the year, raising thousands for the benefit of former and current RAF men and women and their families. It is a cause that she passionately believes in – and one she is grateful to for the personal help they have provided: “The RAF Benevolent Fund generously turned my bathroom into an en-suite with level access shower and various disabled modifications, none of which we would have been able to afford.

“Last year I was lucky enough to be offered a scholarship through Flying Scholarships for Disabled People which has turned my life around and given me a totally new outlook on life.”

Determined to put something back, Karen created ‘Kinneddar Crochet’ – with all sales going to her fundraising efforts.

She added: “To say thank you to two incredible charities, I am hoping to raise £3000 during my 50th Birthday year. All my Kinneddar Crochet sales will be donated to my target, as will all my articles for a local lifestyle magazine.

“I asked for donations in lieu of birthday presents and raised £336.50 and next I plan to be abseiling off the Forth Rail Bridge on October 15, which will be interesting considering my fear of bridges!”

Karen upped her original target of £2000 after a friend made a generous donation of over £1000.

Kinneddar Crochet cab be found on Etsy and Facebook, where Karen currently has a giveaway offer – but that ends tomorrow (Thursday) afternoon. There is also a Kinneddar Crochet Facebook page while Karen’s £3000 appeal has its own Virgin Money Giving page where there is more information.