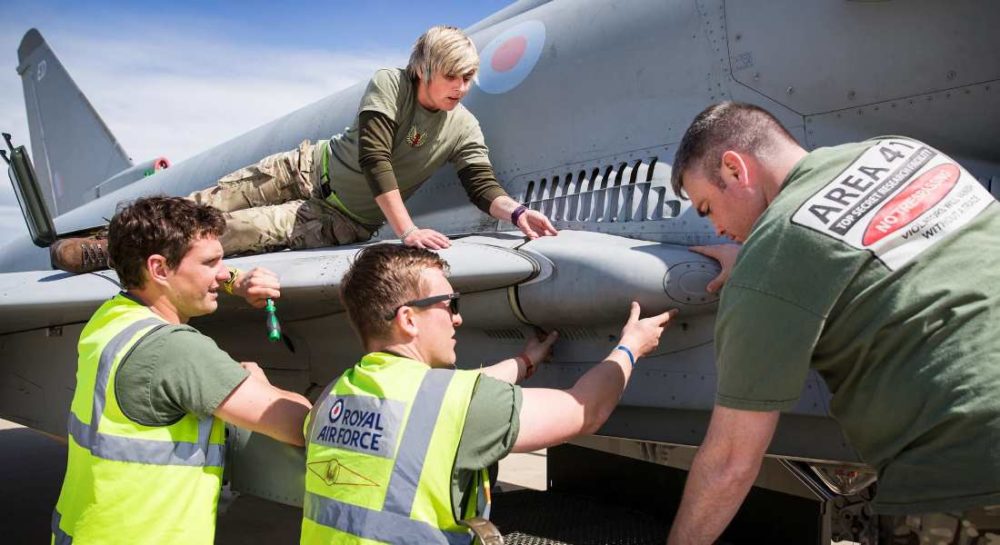 TYPHOONS FROM RAF LOSSIEMOUTH have been taking part in what are being described as ‘historic’ flights in one of the world’s largest air combat exercises.

Aircraft from 1(Fighter) Squadron from the Moray base have been flying alongside F-35 Lighting II aircraft in the United States as part of a combined force.

They have been pitched against ‘aggressors’ in the form of F-22 Raptors from the US and Rafale jets from France in Exercise Atlantic Eagle 17. The exercise is particularly notable as it is the first time the F-35 has worked alongside NATO aircraft.

During the exercise the Chief of the Air Staff, Air Chief Marshal Sir Stephen Hillier, signed an agreement that reinforced the Tri-Lateral Strategic Initiative between the United States, France and the United Kingdom.

Wing Commander Chris Hoyle, OC 1(F) Squadron, said: “Exercises like this strengthen the unshakable bonds between the air forces of our nations which have stood the test of time and remain central to our collective security. “The UK will be taking delivery of 138 of the F-35s from Lockheed Martin for both the RAF and the Royal Navy, to use on its Queen Elizabeth Class aircraft carriers.

“The F-35 is a highly capable aircraft and operating alongside it on this exercise gives the RAF a taste of what to expect when the F-35 is introduced into front line service with the UK Armed Forces,”

Exercise Atlantic Eagle 17 presents the RAF, US Air Force and Armée de l’Air with scenarios that replicate a highly contested operational environment. They are flying together in a variety of complex, simulated air battles against F15E Strike Eagles and T-38 Talons, both highly effective aircraft.

As well as working on their flying tactics and procedures, the three air forces are refining the software that allows their aircraft to electronically ‘speak to each other’. It is this ‘digital bond’ that allows the differing capabilities of the Typhoon, Rafale, F-35 and F-22 to be used to maximum effect.

Flying in the exercise was Group Captain Paul Godfrey, RAF Lossiemouth’s Station Commander, who said: “This synergy is what we call a force multiplier.

“The F-15s and T-38s kept coming at us but with all of the aircraft capabilities that we had available to us it was amazing to see how it all fitted together and how lethal we were.”