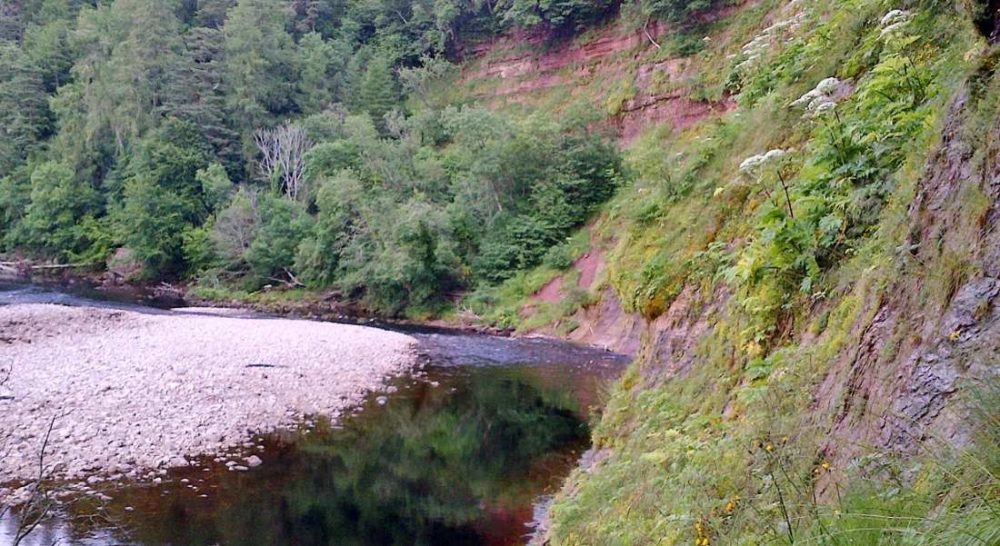 MORAY IS AT WAR against an invasion of alien weeds on riverbanks – and those battling in the frontline are revealing new weapons in their armoury.

The battle against invasive plants such as Giant Hogweed has seen ropework contractors being deployed, scaling cliffs along the River Findhorn so that they can get at the plants that nobody else has been able to reach.

This year the early spring has seen Giant Hogweed beginning to grow quickly, but thankfully the Scottish Landfill Communities Fund, through Highland Council, has stepped into the breach and provided £20K to control the spread of the plants along the River Findhorn and River Lossie.

Funding has been awarded to the Findhorn Nairn & Lossie Fisheries Trust to continue their programme of giant hogweed control for a sixth year. This will allow specialist contractors to continue treating the infestations of Hogweed along our riverbanks.

However, the River Findhorn Gorge at Logie and the cliffs at Broadreeds Pool at Darnaway present a real challenge. Giant Hogweed grows wherever the seeds wash up – in this case half way up a 100foot cliff or in the gorge which is only accessible by boat. If these plants are left to grow and flower their seeds will continue to infest riverbanks downstream.

Bob Laughton of the Findhorn Nairn and Lossie Fisheries Trust says “We have had to be adventurous in how to get to these plants – so we are employing ropework specialists ‘Blokes on Ropes Ltd’ to abseil down the cliff to treat the plants.

“We are also employing Ace Adventure rafters to take us through the gorge to treat the plants. That is more excitement than a fisheries biologist is used to, but a great way to see the river.”

Giant Hogweed was introduced as an ornamental plant in Victorian times- but it escaped and now invades our riverbanks, out competing our native vegetation, and reducing the biodiversity of these important habitats.

The plant can grow to 3m in height and plants can produce many thousands of seeds per flower head. If plants are removed before they reach maturity the number of seeds produced is massively reduced.

Seeds are washed downstream to colonise riverbanks, and as the plants dieback in winter, soils are more vulnerable to erosion. In addition, Giant Hogweed is toxic if touched, reacting with sunlight causing serious chemical burns.

There are severe infestations along the Rivers Findhorn and Lossie which are a hazard to anglers and walkers, preventing safe access to the river banks. This project will continue to control the spread of these invasive plant species, allowing natural vegetation to regrow, increasing the biodiversity of our river habitats and restoring our riverbanks to places for walking, fishing, and enjoying nature.

Bob Laughton concludes: “There is a noticeable reduction in the number of plants growing along the banks of the Findhorn at Mundole and Dalvey after five years of treatment – it is good to see that we are beginning to win the fight to restore native vegetation to our riverbanks.”