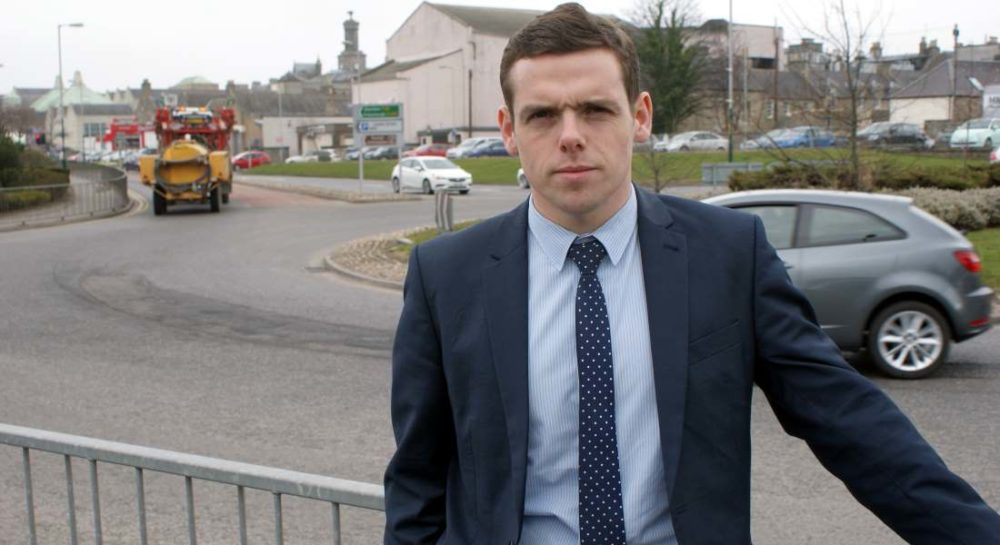 DOUGLAS ROSS WILL contest the Moray seat in the UK Parliamentary Election called for June 8 for the Conservative Party.

The Highlands and Islands Regional MSP who has chosen to base himself in Moray since his election last year has said he believes the Westminster election in Moray will become a straight fight between the SNP and the Conservatives – and he is ready to challenge sitting MP Angus Robertson.

“I was born and brought up in Moray, working here my entire life I am now standing to be the area’s MP at Westminster,” Mr Ross said, adding: “The election in Moray will be between the Conservatives and the SNP.

“Previously people thought the Nationalists couldn’t be challenged in this area – but last year [the Scottish Parliament] election proved that wrong.”

Mr Ross increased the Conservative vote at the Holyrood poll last year by 18% – losing the seat to Richard Lochhead by less than 2000 votes.

Now he is hoping to make inroads into a majority of over 9000 enjoyed by Mr Robertson in the 2015 Westminster poll.

He said: “I hope in my time as a Councillor and MSP covering Moray I have proven myself to be someone that stands up for local people first and foremost. We need an MP for Moray who puts our area first and that is what I pledge to do.

“People will be faced with a choice in this election; support the conservative candidate who will oppose a second divisive independence referendum or to back the SNP who will take every vote for them as a mandate for separation. In Moray 58% of people said No to Scottish independence in 2014 and we can re-iterate that decision by voting out the SNP in June.

“And Nicola Sturgeon has said that she wants to team up with Labour and the Liberal Democrats to keep the Conservatives out of power after 8th June. An SNP MP for Moray would be happy to hand Jeremy Corbyn the keys to number 10 and that is something that alarms many of us.

“Since my election to the Scottish Parliament I have tried to be as accessible as possible. Holding surgeries, meetings and opening an office in Forres.

“Representatives should never forget that our number one priority is to act on behalf of our constituents and that is something I continually strive to do with all the casework I’ve received as an MSP. I might not always be able to get the best solution in every case, by I will work as hard as possible to try.”