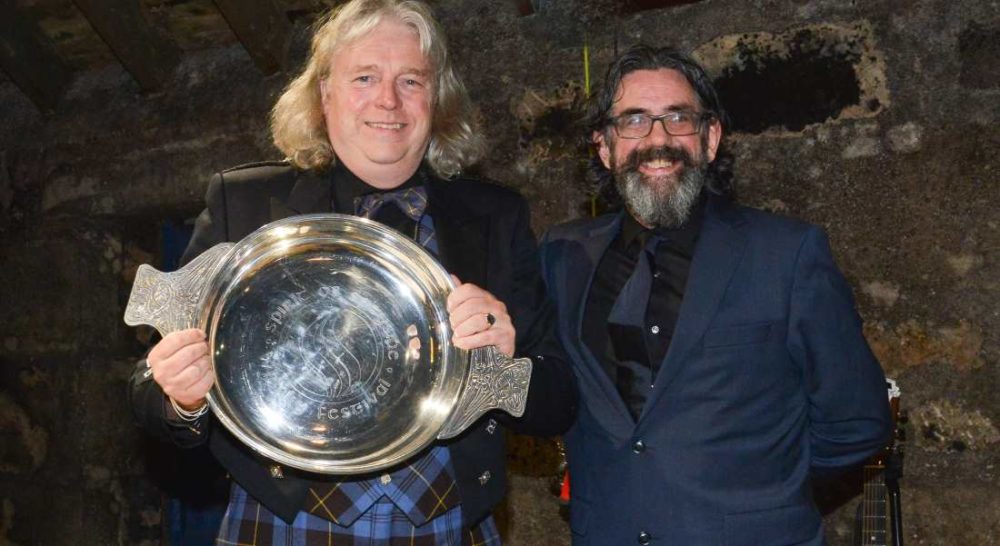 THE SPIRIT OF SPEYSIDE Festival kicked off with an opening dinner last night that saw three devotees of the event being honoured.

The boss of Walkers Shortbread, Jim Walker, joined Glen Moray manager Graham Coull and Dutch whisky write Hans Offringa in being recognised for their contribution over the years.

For Mr Walker it was cause for a double celebration, it being announced that his Aberlour firm had been granted a Royal Warrant from HM The Queen for the supply of Shortbread & Oatcakes to the Royal Household.

On Wednesday Mr Walker received the Spirit of Speyside award for his lifetime of service to Speyside.

When Jim Walker joined the family business in 1961 the company employed around 100 people. Alongside his brother, Joe and sister, Marjorie, they developed the business which at its seasonal peak employs over 1700 people and is Scotland’s largest food exporter. Ambassador of the Year Graham Coull manages Glen Moray Distillery where he has overseen huge investment and growth whilst tirelessly working to expand and enhance the distillery’s product portfolio.

Mr Coull’s role as master distiller at Glen Moray has seen him travel extensively all over the UK and the world, and Glen Moray continues to support many clubs, charities and organisations in the local community too.

International Ambassador of the Year Hans Offringa is a bilingual author, media expert and whisky connoisseur.

He has written nearly 20 books on whisky and numerous articles for various publications across the globe, and has produced a series of educational television programmes for a public broadcasting company in The Netherlands as well as being a lecturer at the International Whisky School in Groningen, Netherlands. He has been a great supporter of the Spirit of Speyside Whisky Festival and has attended every Festival since it started back in the year 2000. Festival chairman James Campbell said of the trio: “Jim has been a great supporter of Spirit of Speyside Whisky Festival since its inception and has made a major contribution to Aberlour and the wider Speyside communities in so many ways over the years.

“The way in which Mr Walker and his family have overseen the worldwide growth of Walkers Shortbread has been a shining example of excellence.

“Graham has also been a passionate supporter of Spirit of Speyside Whisky Festival, and has gone the extra mile on many occasions to help out and to promote the event.

“Hans has written about and promoted the Festival in English and Dutch in a range of publications, enhancing its reputation to potential visitors all over the world.”

The awards were presented at the Festival’s opening dinner, attended by 270 guests, which marked the start of the 18th annual Speyside drams fest.