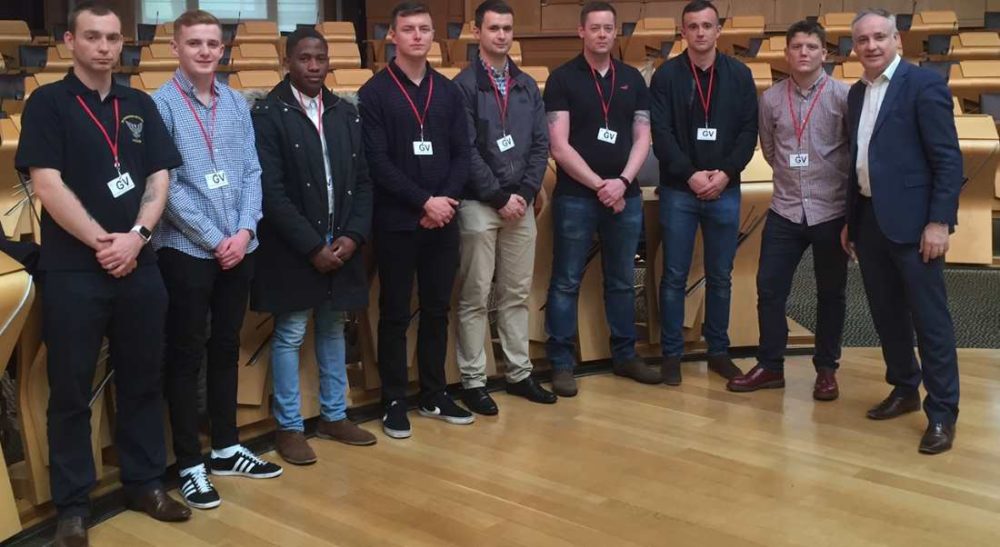 A GROUP OF SOLDIERS from Kinloss Barracks have been welcomed by Moray’s MSP on a visit to the Scottish Parliament this week.

The group from 39 Engineer Regiment led by Captain John Frances were in Holyrood as part of an education and career development visit.

Richard Lochhead MSP gave the soldiers a tour of the Scottish Parliament before discussing with them the role of the military in a democracy.

Following the visit Mr Lochhead said: “I was delighted to welcome ten soldiers from Kinloss Barracks and their Captain to Holyrood and to have the chance to provide a tour of Parliament as well as an insight to the role of the MSPs.

“The young men were extremely engaged in the workings of devolution and good company. We had a stimulating discussion about the armed services and different current affairs topics ranging from defence policy to recent political events and the decision making process.

“We discussed the good work carried out by 39 Engineer Regiment in South Sudan and other overseas locations as well as in this country, so I certainly learnt a lot about the kind of tasks the regiment get involved in not only professionally but in the local Moray community as well.

“I was also interested to hear about how much they are enjoying their stint in Moray given that there were men from various parts of the UK in the delegation.”

Captain Frances said that the group was undertaking an education exercise in Edinburgh that included a visit to the Castle as well as the Parliament building.

He added: “Speaking to the soldiers after the visit they all agreed that meeting with our local Moray MSP Richard Lochhead was the highlight for them.

“He gave us an insightful tour of Holyrood which is a fantastic building and piece of architecture when looked at from an engineering point of view. We also learnt about the history of Scottish politics and how it has shaped the Scotland we live in today.

“Richard was also kind enough to take question from the soldiers on current affairs and political matters that concerned them and their families.

“On behalf of all the soldiers who attended I would like to send our appreciation and thanks for an excellent day, which will be remembered for a long time. I’ve even been asked when we are going again.”