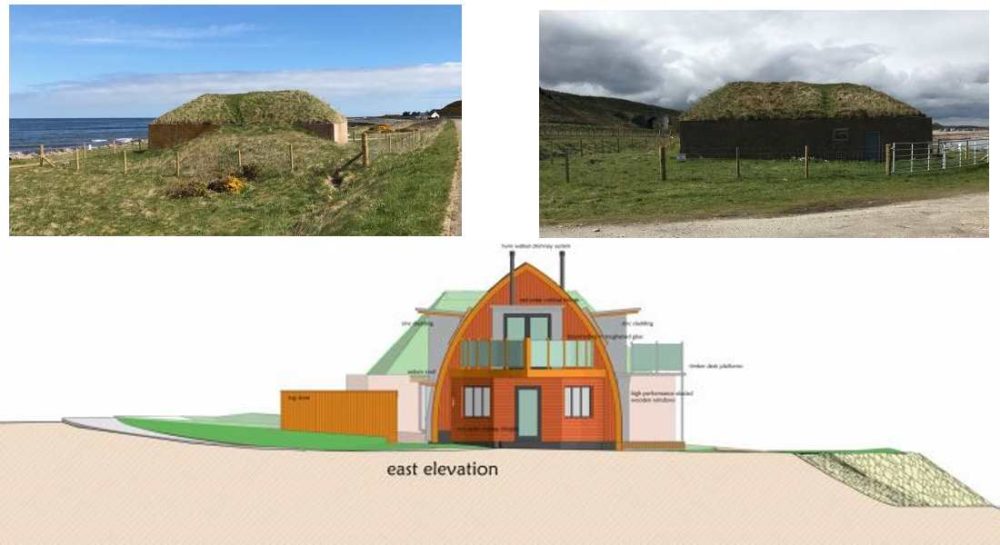 PLANNING OFFICIALS WILL oppose plans to regenerate a coastal village landmark into a café – because it includes accommodation for the owner.

The Gollachy Icehouse at Portgordon has been subject of previous development bids that failed against a backdrop of community and council planning opposition.

The important site enjoys magnificent views over the Moray Firth and has the Speyside Way core path running alongside.

Owner Brigid Aitken is seeking permission to transform the ‘B’ Listed building, saying it would become a popular tourist destination given its prime location for observing the local Seal population. Her plans include the café, car parking and art exhibition space.

However, planners say that the inclusion of a flat above the building is not acceptable and are recommended that councillors reject the application when they meet on Tuesday – despite it having receiving 48 notes of support from local residents, many keen to see new facilities for visitors to the village.

Saying that a site visit had been carried out by officials, papers recommending rejection have noted that the planned development “does not comply with policy” for the coastal protection zone on which the ice house is positioned.

The report adds: “In design terms [the plan] is not considered appropriate to preserve the open coastal character in this location by virtue of its scale, form and massing (especially in relation to the principal heritage interest of the site).

“The icehouse being long established and modest in appearance does not set the precedence in this location for a larger two storey structure such that the coastal protection zone would remain unaltered by its introduction.”

The recommendation to decline adds: “The extension would not comply with Policy BE2 Listed Buildings and would have a detrimental impact on the special architectural and historic interest of the icehouse, by virtue of its design, in particular its overly prevalent scale, form and massing.”

Ms Aitken has said she is “very disappointed” at the recommendation and is now hoping that councillors will see the potential for the site to increase the 100 visitors a day it already attracts.

“I am drawn to the natural beauty and heritage of the site and wish to help better manage and control the vehicular access,” she said, adding: “I also aim to foster a better understanding and appreciation of the seals and dolphins, birds and plants in the area.”

Architect Nick Brown said that if the application is rejected on Tuesday then his client would be unable to return to the drawing board and so would need to sell the site.

In 2013 landowner Gemma Campbell sought to turn the ice house into a Café as part of a larger development that included housing. That sparked the creation of a campaign group in the village to fight her plans which were eventually withdrawn.