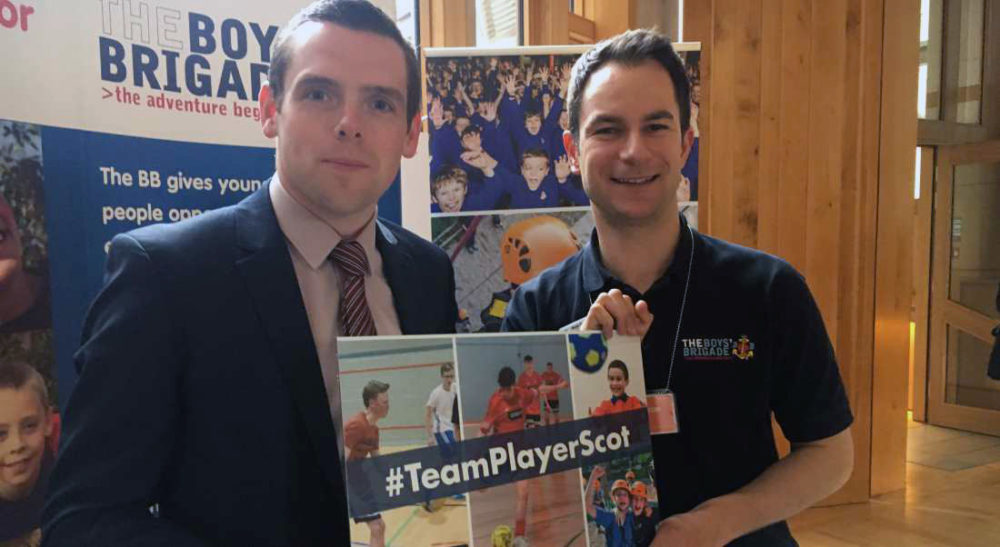 THE BOYS’ BRIGADE has challenged politicians to support them in encouraging more children and young people to participate in regular physical activity.

Pitching their tents outside the Scottish Parliament this week the organisation sought to convince MSP’s that theirs was a cause worthy of support – and Moray-based regional MSP Douglas Ross was happy to oblige.

Mr Ross said that he was delighted to attend the Scottish Parliament event where he met with Niall Rolland, who is the Boys’ Brigade public relations and development officer.

The MSP said: “As someone who became more involved in sport after leaving school I fully support this initiative to encourage youngsters to use sporting activities to develop new skills as well as learning to work with others as part of a team.

“Having benefited from taking regular exercise both in the gym and in outdoor events it’s important that we spread the message that exercise can take many different forms, not just conventional team game or athletics, but also adventurous activities, camps and expeditions to name but a few.

“Locally in Moray the Boys’ Brigade have been very active in football both for recreation and competitively, and this is a great way to encourage teamwork whilst developing their own health and wellbeing.

“I would encourage all our youngsters to take some time away from the computer or Playstation to enjoy our great outdoors and fresh air we have in abundance here in Moray.”

John Sharp is the director of the Boys’ Brigade in Scotland. He said: “We believe it’s important to engage with MSPs on the vital role that youth organisations have in promoting sports and play opportunities for children and young people and were grateful for Douglas taking the time to meet with us in Parliament.”