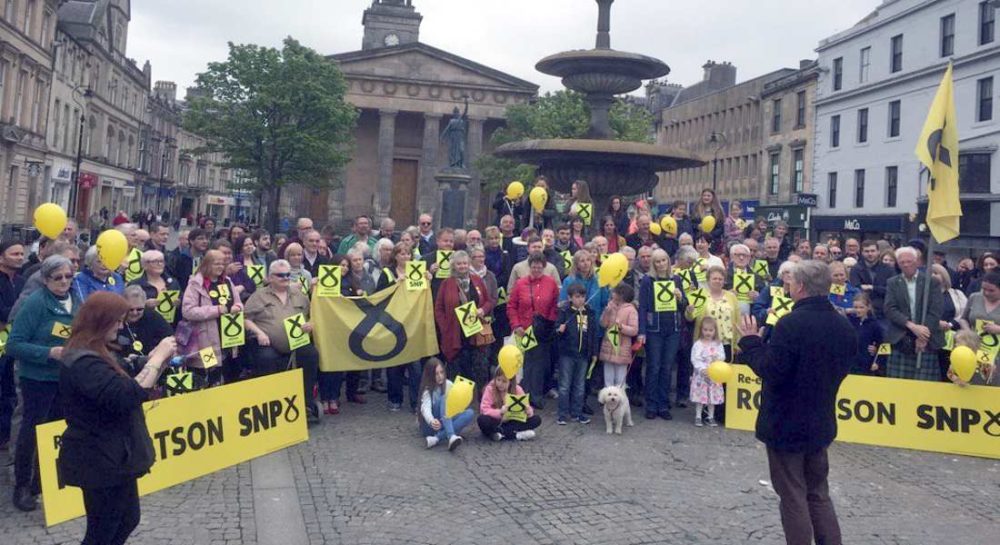 ANGUS ROBERTSON HAS wasted little time in launching his campaign for a return to Westminster when he gathered dozens of his followers in the centre of Elgin today.

Mr Robertson’s Moray seat has become the focus of far greater attention than may have been expected for a man who holds a 9000+ majority from just two years ago.

However, with the Conservatives polling five percentage points ahead of the SNP in the local council polls it is very much ‘game on’.

Today the deputy leader of the SNP warned the Conservatives not to take voters for granted in Moray, saying they have been “repeatedly let down” by the UK Tory Government.

”The Tories want to take Moray for granted and use local votes to deliver their damaging hard line agenda, putting thousands of jobs at risk, just as they want to block opposition elsewhere in the country. I will always put the people of Moray and the people of Scotland first.

”As an MP I have stood up for the thousands of defence jobs in this constituency against Tory cuts, for local businesses against the Tory threat to take us out the single market and for our rural economy when the Tories have repeatedly let down our fishing and farming industries – and I will fight for the best deal for Moray and for Scotland at every opportunity.”

Mr Robertson added that his party had forced the Tories to back down on plans to cut billions of pounds from Scotland’s budget that would have “devastated” the public sector. He also said that the Tory government had been forced to deliver additional powers to the Scottish Parliament “that people were promised”.

He added: ”Week after week I and my SNP colleagues have consistently put the questions to Theresa May and her Tories that the whole country deserves answers to. Every vote for the SNP is a vote for a strong voice for Scotland to stop the Tories having a free hand to do whatever they want.

”With a strong group of SNP MPs elected on June 8th – Scotland’s voice will be heard at Westminster like never before.”